PGA Tour pro Ben Martin has reflected his heart-breaking interview after missing out on a playoff earlier in the season. 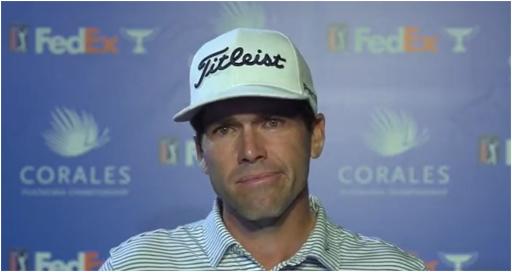 Cast your mind back to late March and you may remember the viral clip of PGA Tour pro Ben Martin.

Martin was playing at the Corales Puntacana Championship in the Dominican Republic and slept on the 18, 36 and 54-hole lead.

He was closing in on his second win on the PGA Tour since 2014 after going through the pain of losing his full status through injury and fighting his way back to earning his playing credentials.

After striking two perfect, beautiful iron shots into the 18th green, Martin gave himself approximately five feet for birdie to tie Chad Ramey's lead to get into a playoff.

Brutally for Martin, the 34-year-old missed and it forced him to settle for a T-2 finish with Alex Smalley, handing Ramey the win.

A few moments later Martin spoke to the media. Martin simply couldn't compose himself to talk about what had just happened.

His voice breaking, tears forming, head bowed, Martin simply did not know what to say or do. Martin stayed silent for more than a minute trying to gather himself.

His caddie tried to comfort him over what had transpired: "It was great man. It was great. I loved every minute of it."

"Give me a minute," Martin said. "Yeah you bet," his looper said.

Chopping onions in here, the reporter added. "I guess maybe I wanted this one a lot more," a composed Martin later said.

"I don't think I've ever been emotional about golf. So this is a first, I guess, to me that's a good thing."

Martin recently joined SiriusXM PGA Tour radio where he reflected on that moment.

Watch the clip below:

You may have seen Ben Martin's emotional interview after the Corales Puntacana Championship. He's had some time to reflect on the interview and the week as a whole and shared his thoughts with Kraig Kann during The Players Show.
@Ben_Martin87 | @kraigkann | @CoralesChamp pic.twitter.com/g7QJS9K1hL