Tiger Woods chats to Jon Rahm at JP McManus Pro-Am - but what do they say?

Between taking countless photos and speaking to many people, Tiger Woods managed to catch a word with former World No.1 Jon Rahm at the JP McManus Pro-Am. 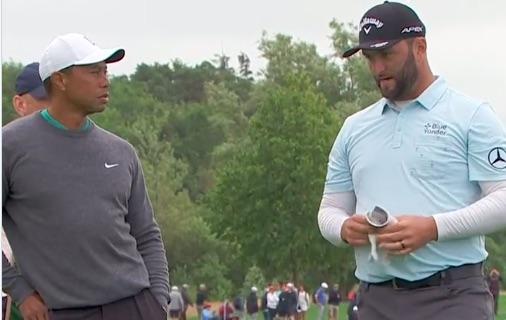 As Tiger Woods has grown older and wiser, he has built relationships with many different players on the PGA Tour and this shows at each event he attends.

Justin Thomas has become a "little brother" to the 15-time major champion and he was seen speaking at length to players such as Jordan Spieth and Jon Rahm at the JP McManus Pro-Am.

Due to the relaxed nature of the 36-hole charity event held at Adare Manor, players were able to mingle mid-round and this gave Woods and Rahm an opportunity to pick each other's brains.

The DP World Tour cameras captured their conversation. It is difficult to decipher what the American is saying to the Spaniard, but it is largely based on swing mechanics.

Related: "The Open is an opportunity to sell greenkeeping to the world"

Rahm, the 2021 US Open champion, was born with a club foot in his right leg. This means he has very limited mobility in his right ankle and this explains the motion of his unique swing.

Despite losing his place as World No.1 to Scottie Scheffler, he picked up his seventh PGA Tour title at the Mexico Open earlier this year. He is ranked first in strokes gained off the tee and second in greens in regulation this season.

He has certainly adapted his swing to a world-class level and Woods has been made to do this throughout his whole professional career with the various surgeries he's had to his legs, knees and back.

Now more so than ever, the 46-year-old is adapting to injuries to his right leg which he suffered in a horror car crash in February 2021. He finished 39th at the Pro-Am in Limerick.

Watch the video in the DP World Tour tweet above and see if you can pick up on the secrets that these two major champions are discussing...