Tiger Woods would have won if he didn't speak to me, says Robert Rock

Robert Rock famously held off Tiger Woods for victory in 2012 at the HSBC Abu Dhabi Championship. This is what it was like to play alongside him on a Sunday. 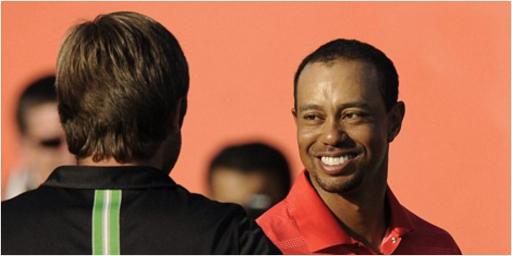 Imagine trying to hold off a charging Tiger Woods and Rory McIlroy on a Sunday - and winning.

Not many people will be able to have that story to tell their grandchildren but longtime DP World Tour professional Robert Rock can.

He is playing in what he believes will be his last season with a full schedule this year and took the time to reflect on his career this week.

Writing in the players' blog for the DP World Tour, he recalled the time he faced off with Woods when he played alongside him in the 2012 Abu Dhabi HSBC Championship.

Rock, now 44 years old and still coaching alongside playing, signed for a 2-under par round of 70, which was enough to win by one stroke over McIlroy.

It capped the most memorable week in his career and admitted he believed if Woods had not spoken to him during that Sunday he probably wouldn't have won.

"The nice thing to be able to say is that Tiger was lovely to play with, because it adds to the memory and makes it much better.

"We spoke the day before, chatted little bits during the round which I wasn't expecting and it put me at ease because he didn’t need to do that.

"On the rare occasion we've crossed paths since we've chatted and said hello and it's nice.

"Tiger is up there for me as someone who I have always admired, someone I used to watch doing amazing things on reruns when I was a club pro opening the shop up at 6am.

"When you're a pro often you can look at guys higher up in the rankings and see where the difference is, but that's not the case with Tiger.

"What you've seen him do, I can't do, and that's why everyone holds him so highly.

"He's made every golfer's life better, from income to coaching, all the way down, and I’m grateful I got to play with him."

The journeyman went onto explain he has no regrets on his career, which has spanned more than 20 years, other than his putting.

This year, he wrote, he is not expecting anything but would like to start rolling it a little bit better.

Rock is back playing this week at the HSBC Abu Dhabi Championshiop. In his first round he shot 4-under at Yas Links.