Tommy Fleetwood's son Frankie took the time to give Lee Westwood a special gift this weekend at the Abu Dhabi HSBC Championship. 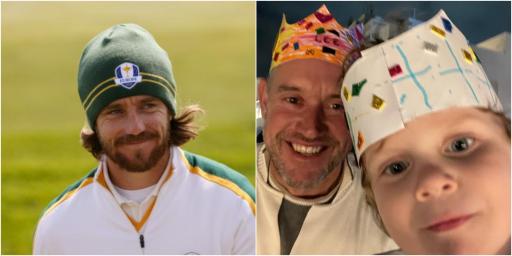 Westwood took to social media to show off his new crown and posed alongside Fleetwood's five-year-old son with a beaming smile.

He wrote: "Just when I thought today couldn't get any better I find out that Frankie Fleetwood had made me a crown with my name on it!"

Westwood and Fleetwood were out in Abu Dhabi for the first Rolex Series event of the year on the DP World Tour.

Related: Fleetwood looking to put forgettable 2021 behind him

Related: How much is Tommy Fleetwood worth?

Just when I thought today couldn’t get any better I find out that Frankie Fleetwood had made me a crown with my name on it! @TommyFleetwood1 pic.twitter.com/8QqtG7ARRs

Clare is private about her personal life and not much is known about her.

It is understood she met Fleetwood while she was working for Hambric Sports Management. Then she started working for/with him.

Fleetwood turned professional in 2010 and has since won five times on the European Tour, including the 2017 Race to Dubai.

He won the Abu Dhabi HSBC Championship a year later by two strokes over Ross Fisher but struggled this to get amongst the leaders.

He is yet to win a major but many golf fans both side of the pond believe he has what it takes to win one one of the big ones.

She has two children from a previous marriage - Oscar and Mo - and Fleetwood has been pictured with them before several times.

Clare has been his manager since 2015 as Fleetwood rose to prominence with huge wins and amazing Ryder Cup performances.

It is understood the age gap between the pair is 20 years. The couple reportedly wed on a beach in the Bahamas.

She was 44 when she is said to have met 24-year-old Fleetwood, according to multiple news outlets.