Rory McIlroy got a free drop during the final round of the Abu Dhabi HSBC Championship in interesting circumstances. 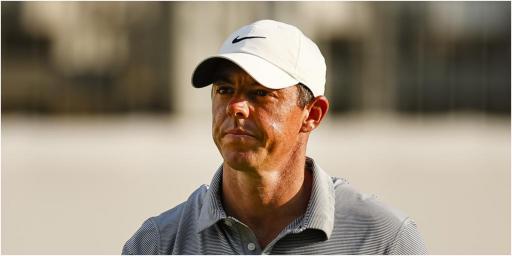 Rory McIlroy received a free drop during the final round of the Abu Dhabi HSBC Championship in an interesting exchange.

Having just made the cut at 3-over at Yas Links on the DP World Tour, it was difficult to see him getting into contention to win.

Yet the 32-year-old Northern Irishman went on the charge early in his final round and managed to hole-out for eagle at the par-4 ninth.

Then he followed that up with another kick in birdie which at the time tied him for second place as he went hunting for more birdies.

This was an almighty charge from McIlroy who made the turn at 4-under.

Disaster struck at the 14th hole for McIlroy who sent his tee shot into the jungle. That thick rough was a nightmare.

But what unfollowed was several minutes of conversation with his caddie Harry Diamond and the rules official.

McIlroy's stance was affected by a sprinkler head if he were to play it right handed. He contemplated playing it left.

Even the commentators suggested had he not been playing in a professional tournament he would have had a crack at the shot.

One thing was for sure, McIlroy was uncomfortable. The commentators spoke of his integrity in saying he didn't know what he'd do.

A few comments trickled in on social media suggesting he was taking one straight out of Patrick Reed's playbook.

In the end, McIlroy was allowed free relief and gouged the ball out and got in back into play. It led to a bogey.

At the time, that put him three back of the leader Thomas Pieters.

His body language visibly changed. "He wasn't comfortable in taking a drop," one announcer said.

"I would never question his integrity, he did the right thing."

It was one of those rounds that could have been extra special, but he limped home.

No no no! Setting up left handed so the sprinkler now gives @McIlroyRory relief??? #AbuDhabi @DPWorldTour

There is no way that @McIlroyRory would have played that left handed?!?!? #freedropmyarse #sprinkler