Ian Baker-Finch echoes Rory McIlroy's comments as he does not believe Greg Norman is doing his legacy any favours as LIV Golf CEO. 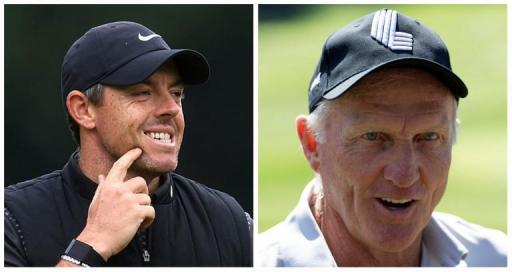 Former Open champion Ian Baker-Finch has echoed Rory McIlroy's sentiments in that Greg Norman needs to step down from his role as LIV Golf CEO in order for the sport to move forwards.

World No.1 McIlroy told GolfMagic and the rest of the golfing media on site at the DP World Tour Championship this week that compromise will not be achieved between LIV Golf and the PGA Tour all the while Norman remains in his role.

"He needs to go... nobody is going to talk unless there is an adult in the room," said McIlroy, who despite being a strong critic of LIV Golf this season is eager for both the PGA Tour and LIV Golf to sort out the mess that is currently unfolding in the professional game.

nobody is going to talk unless there is an adult in the room who can actually try to mend fences.”

Baker-Finch, who won the 1991 Open Championship, agrees with McIlroy and considers Norman is doing more harm than good for his golfing legacy.

"I think it will be difficult [to find a compromise with Norman in charge]. It's been disruptive, combative. It doesn't need to be that way.
"I think there's a way we can all live in harmony, without being so combative. Perhaps that is changing the leader to make that a possibility.
"Greg is always going to have a great, iconic heritage here in Australia. For 10 years he was golf here in Australia, he will always have a place in the history of Australian golf. But I don't know whether this is doing his legacy any favours.
"I kind of understand where Rory is coming from."

Baker-Finch has worked as a golf analyst on the PGA Tour for many years.

The Australian has worked for ESPN, ABC and at CBS Sports, where he remains today.

Recently, he said an emotional farewell to his long-time friend and colleague Sir Nick Faldo, who stepped down from his commentary role.

Baker-Finch has been a mentor of new LIV Golf acquisition Cameron Smith for many years, but he remains in no doubt the PGA Tour is still, and will always, be the best stage of them all.

"Maybe in his mind [Norman] is shaking up the game of golf by offering a different product, I can't say it's good for the game though. I don't think it's golf the way we know it, and I don't think its giving back to golf.
"It's not a pre-eminent tour. It's not golf as we know it, with four rounds and a cut.
"How do I compare against Tiger Woods and Jack Nicklaus or Greg Norman or Rodger Davis? That's what the PGA Tour and all the other tours are offering their players.
"A lot of the players who have gone the other way are still competing, but they've taken the money over the legacy.
"I just see a bunch of guys who already have a lot of money playing for a lot more money. I don't see that being good for golf necessarily."