Alex from GolfMagic tested and reviewed the brand new PING G425 driver range to discover which driver will suit your personal game. 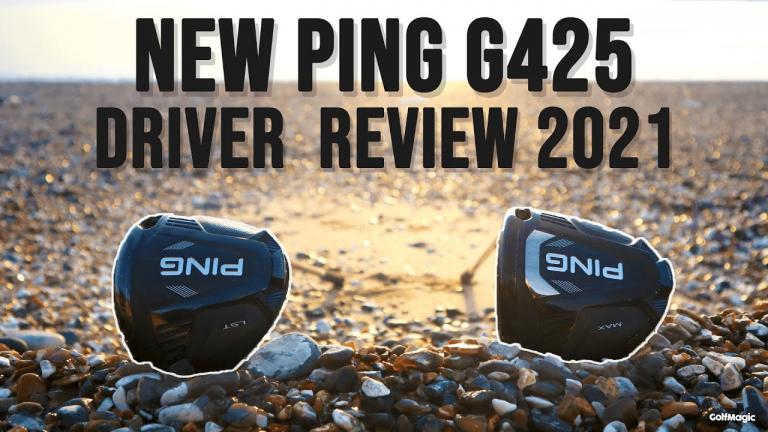 - The complete package, fantastic feel, forgiving, unrivalled adjustability, confidence-inspiring and fairly priced.
- Some may find it a little loud
Our score:
Overall:
5
PRICE: £450.00 YEAR: from 2021

The highly anticipated PING G425 range has finally been announced featuring drivers, fairway woods, hybrids, irons and crossovers. The new G425 family is set to make a storm in the golf industry.

The latest driver from the PING range, the LST, Max and SFT, might just be the best-looking driver in 2021, but it's not all about looks, we need to know how this beauty performs.

GolfMagic's equipment editor Alex Lodge has put the new PING G425 to the test, so check out the video below and help us out by hitting like and subscribing to our YouTube channel for more golf content.

RELATED: Check out all the info you need on the full PING G425 range!

What is the PING G425 driver all about?

In the G425 driver series, the primary model is named Max as it elevates the moment of inertia (MOI) to PING’s highest level in history and provides golfers with the most forgiving driver in golf.

The resulting increase in MOI in the 460cc head comes mainly from a 26-gram tungsten movable weight, which is made possible by weight savings attributed to advancements in the driver’s dragonfly crown technology.

The weight can be positioned at distinctive settings over a smaller area than G410 Plus/LST to help shift the centre of gravity lower and farther back without sacrificing performance elsewhere in the design.

The CG-shifting weight can be secured in one of three settings: neutral, draw or fade - to influence forgiveness and shot shape for maximum performance.

The average MOI increase is 14% across the three weight positions compared to the G410 Plus, with three combinations of weight position and loft exceeding a combined MOI of 10,000 (gm-cm²).

Which golfers should use a PING G425 driver?

The PING G425 Max driver should be used by mid to high handicappers. The driver performs in every way with distance, ball speed and spin rate.

With the 460cc head, this driver is designed to deliver forgiveness. The spin rate is high which helps players keep their ball straight and away from tough areas on the golf course.

If you are aiming for a club with a mid-to-high launch and mid-to-high spin, then the PING G425 Max driver will certainly be suitable for your game.

Which PING G425 driver is right for you?

Here's a helpful table to help you decide which of the new PING G425 drivers are best suited to your game:

In terms of looks, PING has really upped its game with the design of the G425. It looks modern, clean and mean. A winning combination.

The black and silver look along with the matte finish gives the PING G425 Max driver an impressive and smart vibe. They look like tour drivers and the look instils confidence.

When Alex took the PING G425 Max driver to the driving range, it was very, very loud. The sound echoed around the range which is very pleasing.

The noise is different to many other drivers that Alex has tested. The internal rib structure enhances both the sound and feel when you connect with your golf ball.

For golfers who commonly miss their tee shots to the right, the 460cc SFT version (10.5º loft) is engineered with draw bias to help bring shots back online and into the fairway.

It features a fixed 23-gram tungsten back weight that shifts the CG closer to the heel to promote a right-to-left shot bend of approximately 25 yards compared to the G425 Max model. A lighter swing weight (D1) also helps influence the ball flight correction.

An internal rib structure in the Ti-8-1-1 body improves acoustics for a solid and pleasing sound. Each model also features the lightweight, 8-position hosel for loft (+-1.5º) and lie (up to 3º flatter) adjustments to further dial in ball flight.

After testing both the Max and LST models, we were blown away with every aspect of the G425 driver.

The G425 Max model will slot perfectly into the bag of most amateur golfers, thanks to its high level of forgiveness, meaning that even those shots caught off-centre will still travel, while the ball speeds and spin rates remained consistent throughout the face.

PING has clearly placed a premium on forgiveness with this driver and the adjustability available allows golfers to tailor the club to suit their desired shot shape, something that we found worked brilliantly.

Adjustability is an important feature in the modern-day driver, but we've seen in previous years that certain drivers can lose distance and performance when you start playing around with the weights, so it was fantastic to see how well the G425 performed no matter where the weights were placed.

If we were to use one word to summarise the PING G425 driver, the word 'complete' springs to mind. It really does feel like the complete package.

It's everything you want out of your big stick. Distance, aesthetics, forgiveness, adjustability, it's got the lot. The best PING driver we have ever tested.