Viktor Hovland is only one shot behind the lead after day one of the Abu Dhabi Championship on the DP World Tour. 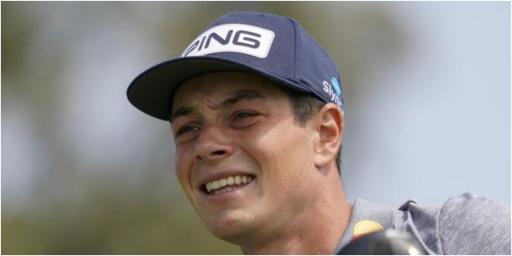 Viktor Hovland is only one stroke off the lead on a low scoring day at the Abu Dhabi HSBC Championship.

The DP World Tour kicked off its first Rolex Series event of 2022 with a new course: Yas Links.

This course took three years to construct but for Hovland it took roughly five hours to deconstruct.

Playing at more than 7,400 yards off the tee, the young Norwegian made easy work of his first day.

Rory McIlroy struggled his way to an underwhelming even-par 72.

Hovland, 24, was flawless on the front nine, notching five birdies to make the turn at a 5-under 31.

The only blemish of his round came at the par-4 12th when he dropped a shot.

That was offset by three birdies returning home to card an 8-under 64.

At day's end, it was Scotland's Scott Jamieson who held the clubhouse lead by one stroke.

A bogey-free 63 proved somewhat of a surprise for the Scot, who said: "I just played really solid all day."

He had to settle for an opening round of 6-under and sits within the top 10.

Related: Rory McIlroy struggles on day one in Abu Dhabi