It is fair to say that Poulter wasn't happy, but he wished this troll "nothing but the best". 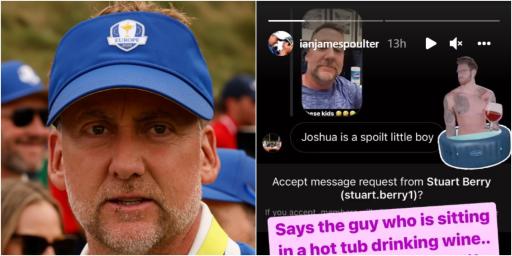 Ian Poulter decided to take on an Instagram troll last night who told the Ryder Cup legend his son was "a spoilt little boy".

Poulter, 45, shared a video of his son Josh completing a putting drill which saw him drain nine consecutive putts in a row.

Little Josh was elated he managed to finally finish the drill after 60 minutes as his dad filmed and chuckled when he got the job done.

In typical fashion, he celebrated like his father with glee and passion. Practise makes perfect. A future Ryder Cupper?

But one person decided to post: "Joshua is a spoilt little boy".

Clearly Poulter took issue with the comment and found an image from the account user sitting in a hot tub.

Poulter fired back: "Says the guy sitting in a hot tub drinking wine... Oh Stuart really... get a life."

He added: "Some people really have jealousy issues. Be happy, I wish you nothing but the best."

Poulter's older son Luke has recently signed with a college golf program to be a Florida Gator.

He's got serious game and looks like one day he will take the step into professional golf.

Most recently, Poulter finished inside the top 10 at the season ending DP World Tour Championship on the European Tour.

Poulter, 45, played in the fall swing on the PGA Tour where his best finish so far was a T18 at the CJ Cup at Summit.

And he is one of the ambassadors of the rebranded DP World Tour.