GolfMagic reveals its favourite new game improvement irons on the market - do you agree? 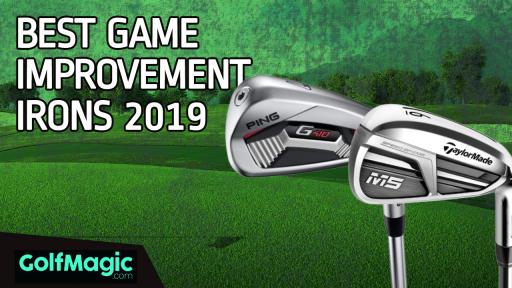 If you're in the hunt for a new set of game improvement irons in 2019, then it's fair to say you've chosen the best year to splash the cash!

GolfMagic has just got back from testing a host of new game improvement irons at La Cala Resort in Spain and we are pleased to give you a showing of our favourites.

Testing every single game improvement iron on the market for 2019, our test delved deeper into the new technologies of each club to look at overall levels of performance, looks, feel and value for money.

Some irons in the Class of 2019 irons offered us incredible forgiveness, while others provided between five and 10 yards of additional distance. There were six, however, that stood out from the crowd.

Watch our test in the video above and read on below to learn more about each iron...

Features/Benefits: The Suspended Energy Core is the engine of the new Big Bertha Irons; a construction never before achieved in a golf club, and designed to deliver easy launch; long consistent distance; and incredible sound and feel. It starts with a Metal Injection Molded (MIM’d) Tungsten Floating Weight suspended within Callaway’s proprietary Urethane Microsphere material. Suspending the floating weight allows the Centre of Gravity to be positioned deeper in the head, promoting higher launch.

Verdict: Incredibly forgiving, packed full of power and launches higher and easier than any other game improvement iron on the market. Pleasingly not as loud and vociferous as the former Big Bertha iron. Very pricey, but if you have the cash to splash you will not be disappointed.

Verdict: One of the longest and straightest game improvement irons on the market. Just like the full KING F9 family, it's one of the more appealing new lines on the shelves. We noted great feedback on off-centre hits and there was a hearty sound when the ball was caught out the middle. Superb value for money at £700. For us, the best game improvement iron in Cobra's history, just like its new driver.

Verdict: A real looker that offered the very best in the feel stakes with buttery soft sensation throughout testing. We also noted great feedback on squiffy hits. The look of a player iron at address, especially in the short irons, but the performance of a game improver. Not the longest iron we've ever tested but the forgiveness was as strong as we've ever seen from a Mizuno iron. Pricey but well worth a punt if you're a fan of Mizuno irons.

Features/Benefits: PING has taken game-improvement technology and reshaped it, giving the model less offset and a shorter blade length while maintaining MOI to create the most forgiving iron on the market for its size. To generate power, face hinging and a larger flexing zone increase ball speeds for more distance and higher peak trajectories so you're able to hit and hold more greens. Feel and sound are improved with a co-molded cavity badge that damps vibrations.

Verdict: Probably the most consistent performer in our game improvement irons test. Pin-seeking straight with a beautiful trajectory throughout testing. Definitely the easiest iron to launch and most pleasant to hit. Great feedback on off-centre strikes and a hearty sound when caught out the middle - which is hard to miss! An iron you'll just want to keep coming back for more.

Features/Benefits: The new Speed Bridge structure unlocks the ability to use our fastest thru-slot Speed Pocket for the first time in our players distance category. Additional stiffness around the perimeter of the head generates higher ball speeds due to reduced energy loss at impact. An ultra-thin face design with patented Inverted Cone Technology (ICT) delivers faster ball speeds over the entire face area. Fluted Hosel and 360° undercut effectively lowers CG to increase launch angle and ball speed to generate a strong, penetrating ball flight even on low-face impacts.

Verdict: Ticks boxes across the board from distance, accuracy, feel and looks. For us - if money was no issue - the M5 iron would be the one we'd stick straight in the bag.

Features/Benefits: Long irons have three rows of 'Power Holes' for maximum distance, while the shorter irons have fewer Power Holes with optimised weighting for maximum feel and precision. Golfers will  note a hot, responsive face for longer shots and improved feel.

Verdict: Incredible distance and quite possibly the longest iron we've ever hit. Forgiveness in bundles, too. Not the best feeling compared to the others, and also not quite as a sleek and sexy, but there are no pictures on a scorecard. The best-value-for-money iron in the test.