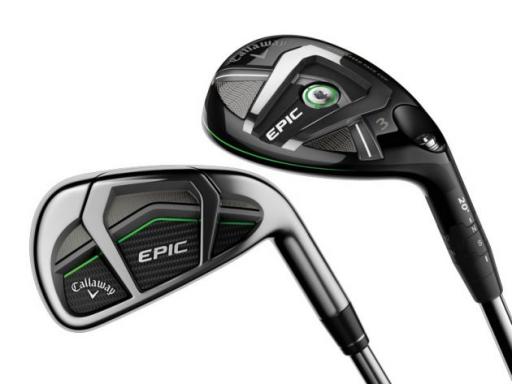 Callaway’s new Epic irons and hybrid take inspiration from the popular Epic driver, which showed that strengthening the framework of the clubheadhead improved face flex, and ultimately performance.

The GBB Epic driver did this via Jailbreak technology – two bars behind the face that connect the crown and sole.

However, the same technology could not be implemented into an iron or hybrid as these clubs are required to be more versatile than drivers, and  have a smaller face.

In order to achieve top performance via the same theory used in the Epic driver, Callaway decided its irons needed to use premium materials and a new face design.

Support beams – like those seen in the Epic driver – create a cage structure, for added stiffness and more forgiveness thanks for more face flex.

The irons are progressive in both design and materials used, which changes CG through the set. A hollow design is used in the heel hosel, saving 20 grams, due to a process called metal injection moulding (MIM).

MIM allows the density, size and location of the weight structure of a club to change in each iron.

New Face Cup technology, in which a cup wraps around the top and bottom of he head, is employed to offer more ball speed and forgiveness.

The rim of the irons have also been thinned to as little as one millimeter.

The new Epic hybrid has a lightweight triaxial carbon composite crown, and has a similar face cup to that seen in the irons.

MIM is also employed, while adjustability is also on show.