US PGA champion Justin Thomas has described the new Titleist TSR3 driver as "unbelievable in terms of misses" as he deploys the new release in Memphis. 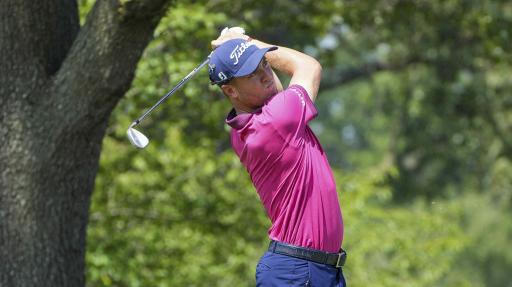 US PGA champion Justin Thomas is very pleased with the new Titleist TSR3 driver in his bag for the FedEx St. Jude Championship this week.

Although the Titleist TSR drivers were released earlier in the season at the Travelers Championship, Thomas was unable to fully practice with the new release due to a back injury.

Fast-forward through the Genesis Scottish Open, The Open Championship and a post-major break, the 29-year-old finally got the opportunity to put the new driver in his bag for the first event of the FedEx Cup Playoffs.

Thomas is currently 5-under-par through 54 holes at TPC Southwind, eight shots behind J. J. Spaun. His driving accuracy reached 64% in the third round, but Thomas is most impressed by the technical features of this new club.

"The biggest difference is the spin. When I heel it, it doesn’t spin crazy high and when I toe it, it’s somehow spinning a little more. It’s unbelievable in terms of misses," Thomas said after the first round on Thursday.

"I like it being a little bit open. I don’t like when I can’t see a lot of face because then I feel like I have to get it up in the air and then I start getting underneath it and that gets the two-way miss going.

"I feel like when I’m driving it my best, although I like to work it both ways, I feel like I aim at something and rip it and it goes pretty straight and falls right. Kind of letting the openness in the club let it fade a little bit."

Thomas is using the Titleist TSR3 driver with a Mitsubishi Diamana ZF 60 TX shaft and 10 degrees of loft. As it happens, Thomas is an extremely competent driver of the ball. He is ranked 3rd in strokes gained from tee to green and 16th in strokes gained off the tee on the PGA Tour.

The Titleist TSR driver is certainly one of the best golf drivers of 2022 and with its forgiveness from mishits that Thomas speaks of, perhaps it could help the former FedEx Cup champion to an $18 million bonus in two weeks' time.