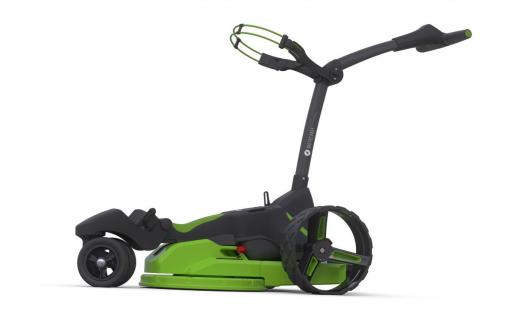 The cutting-edge TRM 1 from Motocaddy, the world’s top-selling trolley brand, was the brainchild of the new Director of Engineering and Technology, Ian Gell who has mown down the competition since his arrival.

“We wanted to come up with a design concept that hoovers up the competition, while at the same time ensuring golf courses look in the best condition possible,” said the former Dyson employee.

The high-powered electric trolley features five grass cutting settings from a high cut when in deep rough to a top cut when walking over a green. Available from today, the TRM 1 can potentially save golf clubs thousands of pounds in maintenance costs: “It’s a great idea from Motocaddy, we can trim the budget as well as the grass,” said a well-known Club Manager.

Related Articles
NEW Titleist TSR Drivers and Fairways introduced on the PGA Tour
At the US Open, Justin Rose reveals why he left TaylorMade for Honma
If you're staring at your screen in disbelief that a product like this has been launched by one of the leading trolley brands then maybe check the date, something I personally failed to do when this story appeared in my emails this morning.

In fact, it took me far too long to remember that today is April 1st, so be warned, you may come across more than one story on social media that you'll need to think twice about.