Alex from GolfMagic compared the performance of the new TaylorMade P790's and the TaylorMade P770's from 2020. 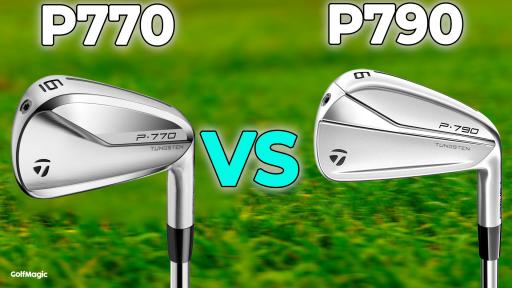 The new TaylorMade P790's are extremely impressive. TaylorMade wanted to deliver a forgiving iron that caters for golfers of all abilities and experiences.

The P790's arrived with a larger sweet spot, as a result of the inclusion of Speed Foam Air, and this is what delivers superb forgiveness.

These irons have become very popular on the PGA Tour. They are player-friendly and they cater for a large demographic of golfers.

The TaylorMade P770's have standard lofts and can deliver solid distances similar to the P790's and they also deliver similar results in club head speed and ball speed.

Alex tested both irons at King's Golf Studio in East Grinstead to discover these statistics. Although they are similar in some data departments, the TaylorMade P790's edge ahead in shot distances.

The design of both clubs are very similar and they both feel similar at address as well. When you address the ball, the P790's and P770's look fairly identical.

But the 2021 P790's have been massively improved by the injection of Speed Foam Air. This has made the sweet spot larger and more forgiving with strikes that come out of the toe and heel.

RELATED: HERE'S WHY BRYSON DECHAMBEAU WAS A "PAIN IN THE BUTT" IN RYDER CUP GROUP CHAT!

If you want an iron that helps you hit the ball further, the TaylorMade P790's can solve this problem in your game. This makes the iron suitable for golfers of all abilities.

With their lower lofts, the TaylorMade P770's are more suitable for lower handicapped players who want an iron for precision and shot-shaping.

NEXT PAGE: THE BEST PETER MILLAR GOLF SHOES FOR THE WINTER WEATHER!