It's time for another brand battle and in our latest video, the TaylorMade SIM2 driver takes on the Mizuno ST-Z. 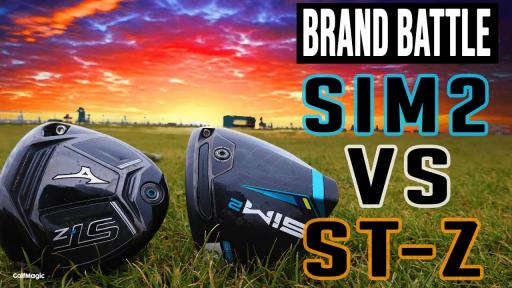 We have seen some fantastic drivers released this year and after testing pretty much every big stick out there, we're putting two of the latest up against each other, as the tour-proven TaylorMade SIM2 takes on the underrated Mizuno ST-Z.

The SIM2 driver from TaylorMade has already made its mark amongst both amatuer golfers and professionals, with sales going through the roof and PGA Tour players using it in some of the biggest tournaments around.

The Mizuno ST-Z driver on the other hand has flown under the radar as one of the most underrated drivers of the year and we were blown away by its performance during a recent club test, so we though there was no better time to put it up against one of the best in show.

As the defining component of SIM2, the forged aluminium ring is one of four crucial elements of the unique construction – each serving a vital function that allows the driver to be forgiving, fast and powerful. The other modules are the carbon crown, carbon sole and milled back face cup.

A Nippon steel product that was developed over five years as a lightweight, high strength material for the automotive industry and used for complex cycle parts requiring intricate design and an ability to withstand strong forces, SAT2041 has a fine grain structure inherently resistant to fatigue. As a high strength Beta Ti, SAT2041 maintains its characteristics and resists micro fractures for longer than the commonly used 6-4, Alpha Beta Ti.

The ST-Z driver has been designed to be ultra-stable and to offer low-spin efficiency. It has a balanced toe/heel carbon composite construction with deep central back weight – for a spin efficient, straight-line ball flight. It features the 2nd generation of Mizuno's Forged SAT2041 Beta Ti face for potent ball speeds and consistent performance over time.

A balanced use of carbon composite on the sole and a deep central sole weight are biased towards a straight-line flight and low spin efficiency. The ST-Z driver has a wide, low footprint, with a neutral visual lie angle and comes with 4 degrees of quick switch adjustability to fine-tune look and trajectory.

Two of the most impressive drivers of 2021 and both would make an incredible addition to your golf bag, so make sure you watch the video to see which one came out on top! If you enjoyed the video, help us out my hitting that like button and comment which iron you prefer! Make sure you're subscribed to our YouTube channel so you can keep up to date with all of our content!