Alex from GolfMagic takes a look at which is the best fairway wood of 2021... 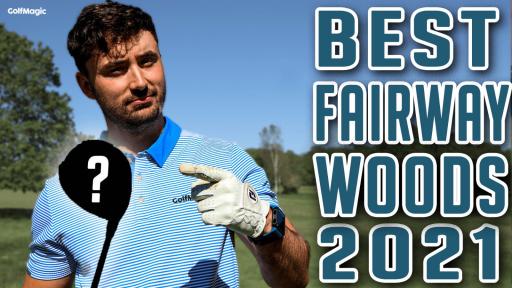 Golf fans and players have been blessed with a flurry of fantastic releases by the sport's biggest brands this year, which has produced a superb selection of fairway woods.

Alex from GolfMagic took a set of 3-woods to Mannings Heath Golf and Wine Estate to test their forgiveness, feel and distance to determine which club is the best.

As part of the selection, Alex tested the TaylorMade SIM2 TI, the Callaway Epic Speed, the Cobra Big Tour and the PING G425. All of the clubs were set at 14 degrees with stock shafts.

The TaylorMade SIM2 TI is part of the incredibly popular SIM series. The design is very modern and fresh and comes in an attractive colour scheme.

The SIM2 TI 3-wood has a high launch angle, which makes the ball travel slightly less further compared to the other clubs. Nonetheless, the average distance was still at a high mark of 279 yards, with a clubhead speed of 110mph and a ball speed of 160mph.

The Callaway Epic Speed produces an exceptional amount of ball speed but, although it produced the longest shot out of each club, it didn't produce long distances at a consistent rate.

This 3-wood went significantly further than the TaylorMade SIM2 TI, travelling 285 yards and making a ball speed of 161mph. This club has a good feel but is arguably not as forgiving as the other clubs under review.

For the Cobra Big Tour, you have a good amount of forgiveness and distance which has made it a popular, all-rounder of a 3-wood.

The club produces shots at a consistently long distance at 284 yards and a ball speed of 161mph. With an attractive and impressive design, this is a reliable club that would be a great addition to the bag.

This club has a superb design that is typical of PING fairway woods. It has a fantastic matte black finish which gives it a stealthy and stylish look.

When you look down at the club, it instils confidence and the club produces a good average yardage of 282 yards with a clubhead speed of 159mph.

NEXT PAGE: FIVE KEY HOLES THAT COULD DECIDE THE 2021 US OPEN CHAMPIONSHIP