It's one of the most important clubs you'll own. We review 10 Hybrids and put them through the ultimate test with a PGA Pro and Protracer technology. Who comes out on top? 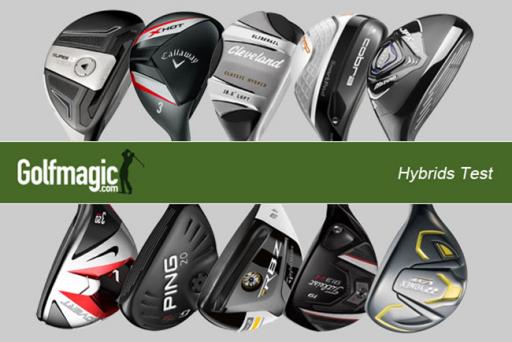 Summary: The CG is positioned deeper in the head to promote a higher launch and a more penetrating flight. Cleveland's third-generation Gliderail sole technology (previously seen on the Mashie line) features rails on both sides of a stabilising bar in the centre of the sole. The purpose is to diminish turf drag, and Cleveland testing found that the new design moves through the turf while losing less speed than last year's sole.

Appearance: Old school appearance is both subtle and clean. There is a nice sleek contrast between shiny black head and brushed-metal silver face. Doesn’t try to be a fairway wood like some of the others. One of the most visually impressive in the test. 4.5

Feel: One of the best feeling hybrids in the test with a really sweet feel at impact. Good sense of ball compression, solid 'crack' sound and general feel of just being able to glide through the swing. The Matrix OZIK X-Con shaft provided us with maximum performance and a stable feel while promoting a high-launch, low-spin flight. Effortless. 9

Performance: Up there in the distance and ball striking stakes. Solid accuracy and desired mid-to-high ball flight was all very pleasing on the eye, as too, an abundance of forgiveness on off-centre blows. Hard to fault. 9.5

Verdict: A very solid alternative to the 2 or 3-iron. The Classic was delivering above-average distance and promoting higher launch and a more penetrating flight than many of the others in this test. Nice and compact looking and generally just so easy to hit. 23

Pro Verdict: Not the most forgiving hybrid I’ve ever played but well struck shots were rewarded with good accuracy. Probably a lower ball flight than ideal but still much easier than a long iron and that is the idea of the hybrid after all.