Jon Rahm bowed out early to the surprise of everyone, but it's two men from England who are chasing the title at Real Club Valderrama. 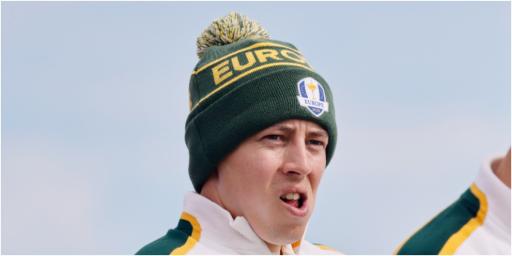 England's Laurie Canter will take a three shot lead into the final round of the Estrella Damm N.A. Andalucía Masters.

Canter, 31, made four birdies and two bogeys on the front nine as he made the turn in 33 (2-under) at Real Club Valderrama.

He then made birdies at 10, 11 and 15 but struggled on the home stretch as he closed out the day just ahead of Matthew Fitzpatrick.

A battling Canter will be going for his maiden European Tour win after a number of near misses over the last few seasons.

He leads the tournament sitting at 7-under par with rounds of 74, 65 and a gutsy 67 after he made a superb birdie up the last.

Fitzpatrick, 27, made three consecutive birdies from the 10th, dropped a shot at 13 and struggled on the home stretch as the wind picked up.

A clutch par putt up 18 saw Fitzpatrick sign for rounds of 71, 68 and 70 to sit at 4-under par for ready for his Sunday charge.

Fresh off a frustrating Ryder Cup in which he played well but got no points, Fitzpatrick is going for his seventh European Tour win.

Only a handful of players find themselves under-par going into the final day on the par-71 layout.

It is a testament to just how difficult this course is and how punishing it can be if you don't keep the ball in play off the tee.

Jon Rahm made a surprise early exit as despite a rough Ryder Cup for Europe the Spaniard was simply sensational.

He opened his tournament with an uncharacteristic 78 (7-over) and then followed that with a 74.

Birdie number seven of the day for @LaurieCanter.

His lead is three. #EDAM2021 pic.twitter.com/cwSLs7IlCg

Rahm did play his final 11 holes for the tournament under par but it only limited the damage.

It marks the end of two straight weeks in Spain for Rahm on the European Tour.

Even though it hasn't panned out how he would have liked the World No. 1 has shown his class.

He stayed behind to sign autographs after he equalled his second ever worst score in a professional event.

Elsewhere, American David Lipsky shot a stunning third round 64 to tie the lowest ever round recorded in the history of the tournament.

RELATED: FORMER PRO WHO SUED THE PGA TOUR HAS AMPUTATION

RELATED: IS THIS THE WILDEST PGA TOUR BIRDIE OF THE SEASON?