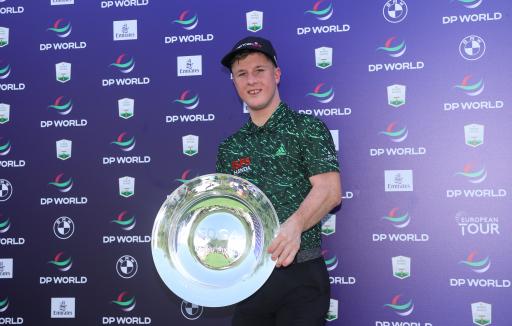 Lawlor carded a round of 73 on the Earth Course for a winning total of 1-under par, holding off the challenge of Canadian Kurtis Barkley for his third victory in the five-event series.

The 24-year-old held a two-shot overnight advantage after opening with a 2-under par round of 70 on Friday, but after a level par front nine, that lead was cut to just a single shot on the 14th hole.

Barkley, who was 2-over on the front nine, had birdied the 10th to apply some pressure at the top of the leaderboard, moving to 1-over par as Lawlor slipped back to level par due to three bogeys and one birdie after the turn.

RELATED: GOLF RULES: AFTER RORY SABBATINI DQ ON PGA TOUR, WHAT IS THE ACTUAL RULING?

However, Barkley dropped shots on the 16th and 18th holes for a round of 75 to finish on 3-over par, while Lawlor birdied the 15th and 17th either side of a bogey on the 16th to move back into the red for the tournament, safely making par on the 18th to seal a four-shot victory.

"Going into the back nine I was actually quite nervous as I knew I had a bit of a lead," said Lawlor, who is now expected to return to Number One in the World Ranking for Golfers with Disability (WR4GD).

"It was down to two at one stage and my putting wasn’t one hundred per cent, but I got the job done and that is what matters.

"My ball-striking has been unbelievable all week. The only bad shot I hit today was on 16, I pulled that one left but I will put that down to nerves. Probably tee to green that is the best I have ever played and I also haven’t been working much on my game.

RELATED: JACK NICKLAUS POSTS WARM MESSAGE AFTER HIS WIFE IS INDUCTED INTO HALL OF FAME

"I'm absolutely delighted to win here his week and hopefully there's more in the future."@BrendanLawlor97 enjoyed victory at the EDGA Dubai Finale pic.twitter.com/twDO7LdrtR

"I’ve been suffering from a bad shoulder for the past six weeks and haven’t been playing, so maybe it’s good to have a break sometimes and forget about the clubs. So, to come out this week and play well, I am really delighted."