Golf rules: After Rory Sabbatini DQ on PGA Tour, what is the actual ruling?

This is why the South-African born Slovak was given his marching orders. 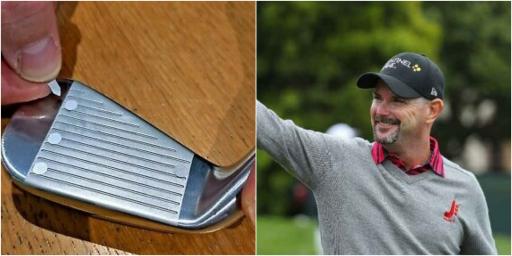 Rory Sabbatini will probably have had some strong words for his caddie.

The South-African born Slovak, 45, was disqualified from The RSM Classic on the PGA Tour last night after violating a golf rule.

That rule was having a sticker on one of his fairway woods, which meant that his club was "non-confirming" under the Rules of Golf.

The sticker in question was the type you'd regularly see in range sessions.

It does not provide any improvement to the strike or give any advantage to the user.

It helps give feedback on technology such as TrackMan.

But neither Sabbatini nor his caddie noticed the sticker was still on the club face in question.

A round of 4-under followed at the Seaside course in a low scoring day.

Sabbatini reportedly told the rules official himself and was duly given his marching orders.

But what is the actual rule here?

Thankfully, the guys over at @golfrules_questions have the answer:

To go into further detail, this is the lowdown on Rule 4.1:

Clubs Allowed in Making a Stroke

(1) Conforming Clubs. In making a stroke, a player must use a club that conforms to the requirements in the Equipment Rules:

"Performance characteristics" means any part of the club that affects how it performs in making a stroke, such as its grip, shaft, club head or lie or loft (including lie or loft of an adjustable club).