The 24-year-old American had a stroke of good fortune when he sent a poor tee shot towards the water on the European Tour. 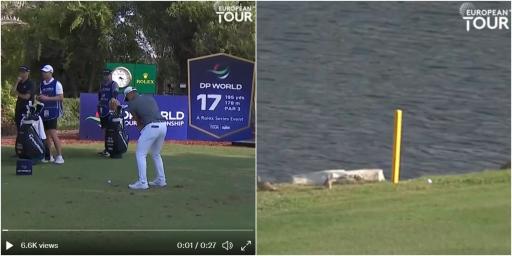 Open champion and current the Race to Dubai leader Collin Morikawa had lady luck on his side on the European Tour.

Playing his second round at the DP World Tour Championship, Morikawa stepped up to the par-3 17th and took dead aim.

It's not exactly an easy hole. 195 yards. Water looming. It's not a shot for the faint of heart.

At this point in his round the youngster who clinched the winning point for the United States in the Ryder Cup was 3-under.

But he didn't exactly connect with the ball the way he wanted. Far from it, in fact. "God!", he exclaimed. "Get. In. The. Bunker."

His ball was heading straight towards the wet stuff but a bit of luck was on his side.

Instead, his ball markkaa off the yellow hazard post and came to rest. Of course, Morikawa scrambled for par.

He duly made birdie at the 18th to sign for another 4-under 68, the same score he shot on Thursday.

If you can't be good be lucky. It appears Morikawa is both.

After 36 holes, Morikawa is inside the top 10 and trails the leaders by two strokes.

Morikawa was this week awarded honorary life membership with the European Tour.

The winner of this tournament is set to win $3 million.

Morikawa, 24, is the favourite to win the Race to Dubai

The United States' Billy Horschel, second in the standings, has started poorly and is level par after two rounds.

Even a victory for Rory McIlroy would not be enough to win the points race, who is 20th in the rankings.

Jon Rahm, the current world number one, pulled out of the tournament beforehand.

He cited the fact he wanted to continue spending time with his family and take an extended break from the game.

NEXT PAGE: NELLY KORDA HAS A NEW COACH