The shocking announcement was made at a press conference ahead of the AVIV Dubai Championship this week. 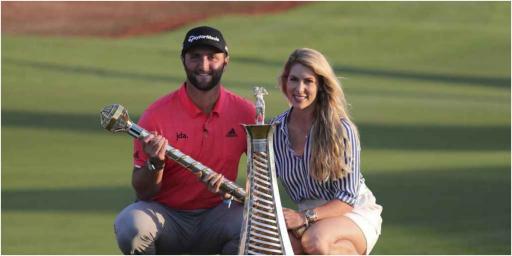 The European Tour dropped a bombshell on the golf world today by announcing they will rebrand as the DP World Tour.

In a press conference ahead of the AVIV Dubai Championship, it was revealed the new mega-deal with DP World will add millions of dollars to its coffers.

It marks the end of an era and has the full support of the PGA Tour.

This is widely regarded as a massive game changer for golf and it effectively looks like it's Greg Norman's ventures versus the world.

This announcement comes a year after the European Tour announced a strategic alliance with the PGA Tour to try and fend off Norman and Saudi money.

MORE: THOMAS PIETERS IS A WORLD NUMBER ONE IN WAITING

MORE: VIKTOR HOVLAND REVEALS HOW HE CHIPS IT NASTY

Nick Dougherty presented the press conference on what was described as a "momentous day" for the European Tour.

Related Articles
Rasmus Hojgaard dunks ENTIRE sleeve of balls into water for quintuple bogey 8
After a slap in the face for LIV's Patrick Reed, his week just got worse

"This is not just a financial decision," he said. "It is our shared desire to elevate the tour to help elevate the game globally".

The 2022 DP World Tour season will have the richest prize pool in their history.

A minimum of 47 tournaments will take place, including new events.

It was revealed these plans had the full backing of the PGA Tour.

Pelley said: "Today's announcement is undoubtedly a momentous one in the proud history of our Tour. The launch of the DP World Tour in 2022, coinciding with both of our 50th anniversaries, will herald a new era in global golf, and crucially it will benefit everybody involved – all our players, caddies, fans and partners – as well as making an important contribution to wider society.

"The entire ecosystem of our Tour will be strengthened because of this hugely significant deal, and that was essential to us and to DP World, who have been an incredible supporter of our Tour as well as golf more widely, from grassroots through to the elite professional game.

"The DP World Tour is, therefore, a natural evolution of our decade-long partnership, and the presence of ‘World’ in our new title better reflects our global reach."

DP World, which is owned by the government of Dubai, is estimated to have total assets of at least $26.1 billion.

They first became involved with the European Tour in 2009 when the Order of Merit was changed to the Race to Dubai.

The Race to Dubai culminates with the season-ending DP World Tour Championship with millions in the prize pool.

The United States' Collin Morikawa is the current Race to Dubai leader with two events left in the calender year.

This move comes at a time of high tension in the golf world with the emergence of the Saudi Golf League spearheaded by Greg Norman as the CEO of LIV Golf Investments and the Premier Golf League.

MORE: JUSTIN THOMAS HITS OUT AT PGA TOUR OVER COVERAGE