2019 Portugal Masters winner Steven Brown spoke to Zane Scotland and Scott Pudney from Callaway about his career on the European Tour. 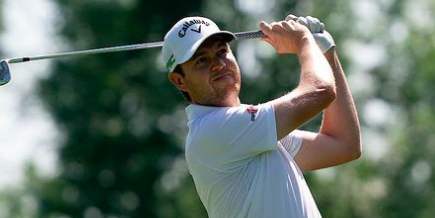 European Tour winner Steven Brown said if you are going to win at the top level in golf, you "100% need luck."

The Callaway staffer sat down with Zane Scotland and Scott Pudney, a representative from the popular brand, on the latest episode of the Callaway Range Pass.

Brown is an experienced player on the European Tour and he is a prime example of someone who has plied their trade and fought their way through the Challenge Tour and other mini-tours in order to achieve success.

When grinding to keep his European Tour card in 2019, the Englishman needed a finish in the top three on the Portugal Masters leaderboard to keep his playing privileges.

Brown shot a bogey-free final round score of 66 at Dom Pedro Victoria Golf Course to win the tournament by one shot from Justin Walters and Brandon Stone.

"I don’t think anyone can say that they don’t look at leaderboards because it is impossible when you are out there," said a reminiscent Brown.

"I knew where I needed to come and because I was so far out still, I needed third by myself or better, and I’d actually had a good week before that in the French Open.

"It was certainly a different feeling going into the week and I was resigned to the fact that it was unlikely I was going to come where I needed to come.

RELATED: WATCH: GOLFER LOSES HIS MATCH THEN TAKES IT ALL OUT ON HIS PUTTER!

The 34-year-old is in the field for the AVIV Dubai Championship this week as he looks to make his first top-10 finish of 2021.

He admitted to recently making some changes to the shafts of his Callaway clubs in order to hit the ball higher and increase his spin rate.

Brown is currently ranked 142nd in the Race to Dubai standings, so he will need a big push in the last two weeks in Dubai to salvage a sizeable prize pot for himself.

Also a two-time winner on the Alps Tour, Brown discussed how difficult it can be to rise up the professional golf ranks, relating to the plight of other golfers such as Mike Visacki.

"It's very tough to win, even on the Challenge Tour and the Alps Tour, it’s very hard. A lot of things need to go your way. Anyone who doesn’t say that if they win if they have had some luck, you 100% need it," Brown added.

"In golf, there are too many variables that need to go your way. You aren’t in control too much and you need those things to go your way and there are so many good players now and that's the hard thing.

"Out there, the depth is so good, even as far down as the Challenge Tour and even the mini-tours below that. There are so many great players now."