The 30-year-old heads out to Dubai on the European Tour this week and will need a strong finish to the calendar year. 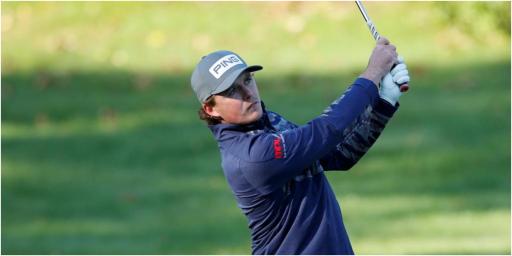 England's Eddie Pepperell is heading out east for the AVIV Dubai Championship with Eminem on his mind.

At least the impression you get when you check the Twitter account of the 30-year-old, who has won twice on the European Tour.

By his own admission it's not been the greatest of year's for Pepperell, who is currently ranked 359th in the world.

He's 140th in the Race to Dubai which means he is outside the provisional cut-off to keep his European Tour card.

That's why he will need a good showing as the calender year draws to a close at the Fire Course at Jumeirah Golf Estates.

Last chance saloon here in Dubai for me this week. As Eminem would say; “One shot, one opportunity.”

So who knows how it’ll go.

A winless year comes to an end with a 39 point stableford victory.

What character the boy showed.

Still, at least Pepperell is good-humoured about his golf.

Known for his self-deprecating sense of humour, he has starred in a number of promotional videos for the European Tour's social media pages.

His last win came at the 2018 Sky Sports British Masters when he won by two-strokes in simply horrendous weather conditions.

Pepperell will peg it up in the first round in Dubai with England's Tom Lewis and Australia's Scott Hend.

Hopefully Pepperell will pull a performance out the bag.

In the meantime, hopefully we can see more exchanges between him and the Patrick Reed account.

What character the boy showed, eh?

MORE: WHERE DID IT GO WRONG FOR ANGEL CABRERA?

NEXT PAGE: HOW FACE PAINT LED TO A RULES DISPUTE

european tour
dp world tour
Race to Dubai
rolex series
Ryder Cup
Previous
10 things you NEED TO KNOW before new drivers launch in 2022
Next
DEBATE: Is a '69 PLAYING HANDICAP' too many shots for a round of golf?