The Northern Irishman has started well at the DP World Tour Championship on the European Tour. 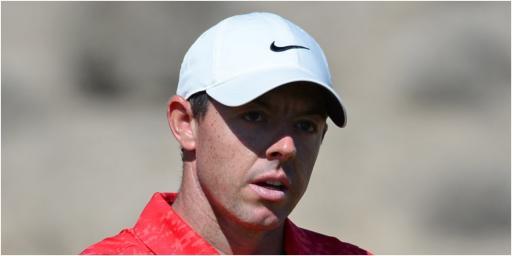 A reflective Rory McIlroy admitted he felt like he's finally got his game back after taking the early lead at the DP World Tour Championship.

The Northern Irishman, 32, signed for a stunning first round 7-under 65 at the Earth Course at Jumeirah Golf Estates.

Only one blemish came from McIlroy on day one in Dubai, who was 6-under par through eight holes before making a bogey at nine.

A sensational eagle came early doors, a run of pars followed on the back nine before he flopped his way into our hearts to make birdie up the last.

Speaking to Sky Sports immediately after his round, McIlroy admitted that he feels this year has strengthened his character.

He said: "Yeah, um, I feel, y'know, I'm a big boy now. I've been around the block a bit and if I have problems or struggles I should be able to sort them out myself instead of looking to others to fix my problems.

"I'm just gonna try and take responsibility a bit (more). That's really what I did after the Ryder Cup, I put my head down. I spent a lot of time just on the range and figuring out, okay, what is it that I do well and what do I need to get back to."

Stunning McIlroy was shaping shots all day and looked confident in his ball-striking. Perhaps his best shot of the day came at the second hole when he set himself up for a superb eagle early in the round.

"I've always been a very visual player," he said. "I've always seen shots, I mean, I don't know how much of the shot tracer was out there today but people probably see me playing shots again. Maybe not quite as much as Bubba Watson, but still that's how I've always played golf and how I've seen the game. I just needed to get back to seeing it like that again."

This year has been difficult for McIlroy. He has won. At Quail Hollow and most recently at the CJ Cup at Summit in Las Vegas to capture his 20th PGA Tour title, but he only contended in one major before fading. He also missed the cut at the Masters.

"It's hard I guess I talked about this a little bit after CJ," McIlroy said of the constant speculation about his game and struggles. "I think sometimes when you don't play your best...maybe I don't set my standards high enough sometimes. They're high, but getting into contention in one major this year isn't good enough for me. I've done way better than that before and I know that I can again especially with how I'm playing and feeling like I've got my golf game back basically. I'm excited for the road ahead. I really feel like I'm on the right path."

Elsewhere on day one, Race to Dubai points leader Collin Morikawa started well and only trails McIlroy by three shots, while Billy Horschel had a poor start as he bids to take the crown away from his countryman by starting with an over-par round.

The Tour's most recent winner, Denmark's Joachim B. Hansen (67) has also continued his fine form and trails McIlroy by two shots. Sergio Garcia is also inside the top-10.

MORE: DID YOU KNOW THIS ABOUT TIGER WOODS?

NEXT PAGE: TOMMY FLEETWOOD OPENS UP ON STRUGGLES