There's no doubt these two will keep trading barbs ahead of their showdown. 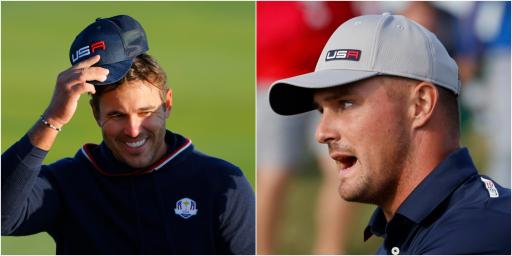 It's no secret Brooks Koepka has been struggling on the PGA Tour for a while now.

He's missed the last two cuts, has been seen practising his putting well into the night at Mayakoba then a week later was also sending his drives to the moon in the darkness at the Houston Open. It hasn't helped the self-anointed range rat yet, though. And frenemy Bryson DeChambeau knows it.

DeChambeau, 28, decided to twist the knife a little ahead of the fifth edition of The Match in Las Vegas where he will showdown versus Koepka mano y mano for the first time since they hugged it out at the Ryder Cup and let bygones be bygones.

NEWS: HOW TIGER WOODS CAN FEATURE AT PRESIDENTS CUP

"Looks like @bkoepka is ready for the match" DeChambeau posted alongside that famous moment where a fed up Koepka heard a comment he did not like from his Ryder Cup team mate during an interview on the PGA Tour.

While Koepka has been busy in the fall swing playing events on the PGA Tour, DeChambeau has taken some time away from the full time grind. He went to the Bahamas to relax, but was seen smashing balls. He followed that with testing out some new clubs.

He's been seen trying out baseball to see how he can transfer that skillset over to his golf swing and went full Happy Gilmore at Topgolf by sending balls over the net with their clubs.

It's likely we'll see a new driver in the bag for The Match for DeChambeau, who revealed the latest model of his Cobra driver is going a lot straighter even with his mis-hits. No doubt it will be fascinating to see how his numbers compare to last season on the PGA Tour.

Neither Koepka or DeChambeau are playing this week on the PGA Tour as it heads to the Sea Island Resort for the RSM Classic. They will play The Match on 26 November, the day after Thanksgiving.

MORE: DID YOU KNOW THIS ABOUT TIGER WOODS?

MORE: HOW LEXI THOMPSON CAN REBOUND FROM RECENT LOSS

NEXT PAGE: PGA TOUR DEBUTANT "NOT SCARED OF ANYONE"