Tommy Fleetwood summarised his year and the current state of his game ahead of the DP World Tour Championship. 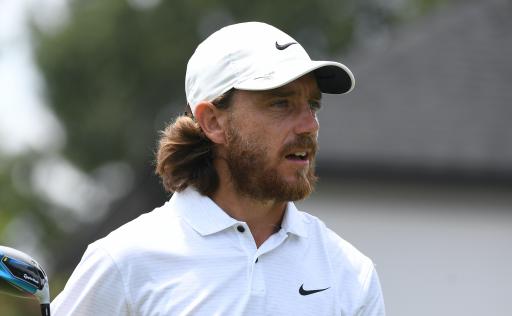 Tommy Fleetwood admitted he struggled during the 2021 PGA Tour season but in true Tommy style, he brushed it off his shoulders.

Fleetwood disappointingly missed out on the FedEx Cup Playoffs this season, which is not a statement you'd usually associate with the man from Southport.

Since the start of the year in January, he has only finished in the top-10 on the PGA Tour twice. He has also fallen 22 places to 39th in the world rankings since the end of 2020.

He was also part of the European Team that was completely humbled by Team USA in the Ryder Cup at Whistling Straits. He failed to finish in the top 30 of either of the four majors this year as well.

"In life and sport, there are always people who are doing great and others who are struggling. I've been one who has struggled for a bit. But in the second half of this year, I’ve played much better," said Fleetwood, ahead of the finale to the Race to Dubai.

"I’ve shot some good scores. And I’ve seen my game getting a lot more consistent. Especially in the last few events, my game has ‘stuck around’ for four days, which has not always been the case in 2021."

There is a reason why Fleetwood is one of the most liked and supported players in the world. His personality is infectious and as you can see, his outlook on his game remains positive.

It only feels like yesterday when he finished fourth to Brooks Koepka at the 2017 US Open and then second a year later.

RELATED: PGA TOUR: HOW TO WATCH THE RSM CLASSIC AND ROUND 1 & 2 TEE TIMES

He finished in the top 20 in the Tour Championship in 2018 and 2019 and he has notched up five wins on the European Tour. These are the reasons why he should still be cheerful.

Fleetwood certainly has a great partner on his bag in Ian Finnis and they are one of the most solid duos in world golf.

"Invariably, I was hitting one or two ‘wides’ that cost me. And when that is happening, you are always on the edge of waiting for that shot to come," Fleetwood added.

"It might be on the 18th, but it always seems to appear. My putting has also been a bit inconsistent, but in-between tee and green I’ve been OK, even if my results haven’t really been showing that. It’s at either end of the holes where I’ve let myself down.

"The Open being back gave me a boost. Nothing makes me feel better than that event. The Olympics was an unbelievable experience. The Ryder Cup was amazing. I’ve seen both sides of that event now.

"I really feel like I’m playing well. I am executing the shots I’m describing and seeing."

This is certainly not a time to write off Fleetwood. He is 14th in the Race to Dubai standings and his two wins in the Middle East suggest his hot streak will continue this week.

NEXT PAGE: "I'M NOT AFRAID OF ANYONE": PGA TOUR CHAMPION TO BEGIN COURSE REPORTING ROLE