Usually it's Max Homa who is the king of roasts but perhaps he has a rival in Justin Thomas. 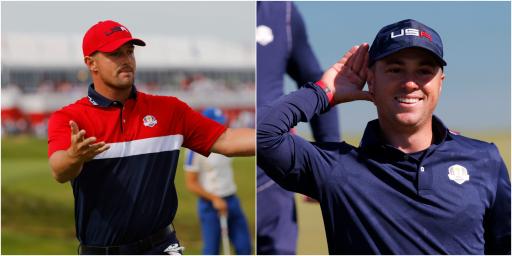 You come at the king, you best not miss. This was the famous phrase coined from the late, great Michael K. Williams who played Omar in The Wire, but perhaps it could be adopted by Justin Thomas.

It's no secret Brooks Koepka is a target for Bryson DeChambeau at the moment. They've got a big match coming up in Las Vegas and their sponsors will no doubt want them to do everything they can to drum up interest.

But late last night it was Thomas who was the target for DeChambeau who goaded his 28-year-old Ryder Cup team mate on whether he had reached 180mph ball speed yet with a comment underneath a training video.

Thomas's video shows just how hard he has to work to keep himself in decent shape on the PGA Tour. He combines working to improve his flexibility with conditioning exercises that makes your exhausted just looking at it.

Of course, DeChambeau had to try and rib Thomas just a little bit. 180 ball speed yet? He queried. Thomas may not hit the ball as far or as quick as DeChambeau but his response was fired back with some serious venom.

NEWS: HOW TIGER WOODS CAN FEATURE AT PRESIDENTS CUP

As Michael Scott in The Office would say: boom, roasted. Usually it's Max Homa who is the king of roasts who interjects on social media with his hilarious commentary. Perhaps he has been giving Thomas some tips?

Ayo lesson here Bryson, you come at the king, you best not miss.