Chris Hughes had "one of the best days of his life" when he played at the BMW PGA Championship Pro-Am at Wentworth. 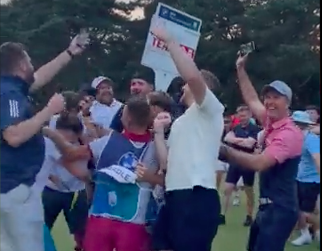 The BMW PGA Championship Pro-Am at Wentworth on Wednesday was a huge success with stars from the sports and entertainment industry taking part alongside the European Tour professionals.

Robbie Fowler, Harry Redknapp, Shane Warne, Eddie Hearn and Sir AP McCoy were just some of the glittering names from the sports world that took part, as well as popular TV personalities.

One of them was Love Island star and now ITV Racing broadcaster Chris Hughes and he was on a team with European Tour player Calum Hill, reality star Gary Beadle and actor James Nesbitt.

It was a great day all around with all of the competitors having an enjoyable time in the Virginia Water sun, and Hughes was one player who particularly enjoyed himself.

"One of the best days of my life I’m not even joking. Just so fun with great people. Start to finish. @BMWPGA thank you once again," Hughes tweeted yesterday.

One of the best days of my life I’m not even joking. Just so fun with great people. Start to finish. @BMWPGA thank you once again pic.twitter.com/vpzVReeZ5P

Along with the 28-year-old's tweet, he added a video of him and his team celebrating a putt on one of the greens at Wentworth, at what was clearly an important point in their round.

In between his obligations at the racecourses and his other television commitments, Hughes has clearly found a lot of time to practice his golf, as he currently has a handicap of 9.

However, Hughes is currently in a relationship with Ladies European Tour player Annabel Dimmock so he clearly finds inspiration from his girlfriend.