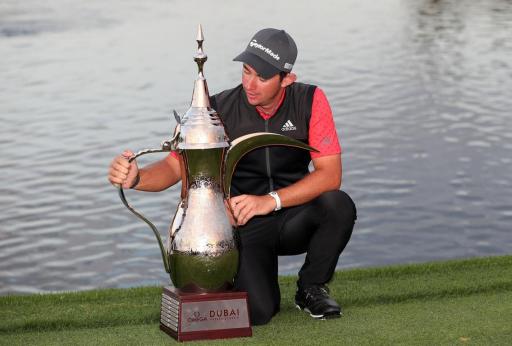 Sunday's final round proved to be one of the toughest days on the European Tour in a long time, with just four players - including Herbert and Bezuidenhout - breaking 70 at the Emirates GC.

Both Herbert and Bezuidenhout shot rounds of four-under par, leaving them both nine-under for the tournament.

Bryson DeChambeau was in with a great chance of defending his title, having won the Dubai event last year. The American was nine under with just four holes to play, but bogeyed his way into the clubhouse to leave him in T8.

At the first play-off hole, it looked as though it would be Bezuidenhout who would be crowned champion, after Herbert cannoned his second into the water, before claiming it was "maybe the worst shot I've hit in my life."

Herbert kept his composure and after the drop, stuck his pitch shot right at the flag for a tap in par, which Bezuidenhout matched with a safe two-putt.

At the second extra hole, Herbert launched a huge drive from the tee, leaving just an iron into the par-5 18th green, while Bezuidenhout sent his fairway wood over the back of the green.

The South African failed to get up-and-down, allowing Herbert two putts for victory, which he made no mistake with.

Herbert, 24, was clearly emotional and admitted he couldn't wait to get home to Australia and crack open a bottle of scotch.

Sebastian Söderberg set a new record on Sunday, playing the fastest round in European Tour history. The Swede shot a three-over par round of 75 in just 97 minutes.

Sebastian Söderberg on the fastest round in European Tour history.#ODDC pic.twitter.com/4J4TxH9wV1