The 24-year-old becomes the first American to win the order of merit... 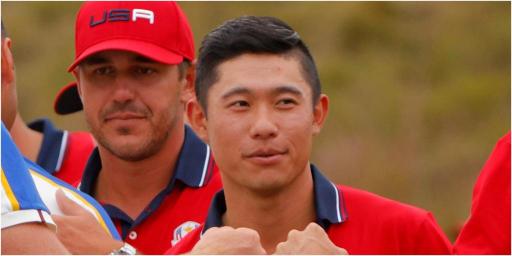 Collin Morikawa completed the double in the desert to win the DP World Tour Championship and the Race to Dubai.

When it mattered most the 24-year-old American turned it on in style and then some as Rory McIlroy's charge faded.

Morikawa had to remain patient from the off as he only mustered one birdie before the turn at Jumeirah Golf Estates.

But in the end his margin of victory was by three strokes after he reached 17-under for the week.

McIlroy led. Then Matt Fitzpatrick briefly threatened to spoil the party and rain on Morikawa's parade.

The Northern Irishman, 32, turned up the heat earlier in the week but in the end he finished in a tie for sixth.

McIlroy finished his final four holes in 3-over par and carded a final round of 74.

But Morikawa is made of sterner stuff. What happened at the turn was simply unbelievable.

Five birdies in his last seven holes propelled him to the top of the leader board and ensure he won the order of merit.

He also picks up $3 million for winning the tournament.

Morikawa told us all week he was only focused on each shot and not of the wider implications.

It looked like it wasn't to be for the majority of the week as McIlroy, Sam Horsfield and Sweden's Alexander Bjork tussled for the lead.

MORE: TONY FINAU SHOOTS A 59 AT SILVERLEAF ALONGSIDE JON RAHM

The focus will naturally be drawn to McIlroy, who had a stroke of bad luck on his back nine.

A wedge into 15 looked stone dead. But the ball clattered into the flag and ripped back. An easy birdie turned into a bogey.

McIlroy made bogey at the next. Charge over. Tournament over. 2021 over. Now it's time to focus on the majors.

Some times you can be too accurate...

"It feels so good, I'd be lying if I said I wasn't watching what Matt Fitzpatrick did today, and props to him. He came out firing. He made a lot of birdies early on," Morikawa said. "But it's 18 holes, right? All I needed to do was catch a spark."

He said making pars at birdie holes "wasn't fun" but at the turn he told himself he was "still in this".

"When putts start dropping, it's always fun," he added.

Morikawa closed for a bogey-free final round of 66 after firing rounds of 67, 65 and 70 at the Earth Course at Jumeirah Golf Estates.