Matt Wallace struck a power line during the opening round of the Italian Open and when taking his shot again, came very close to holing it. 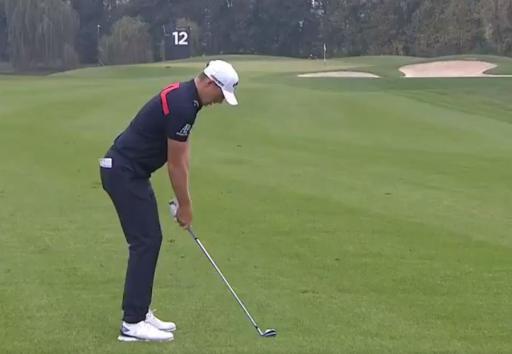 Matt Wallace got off to a great start at this week's Italian Open on the European Tour and on the 12th hole at Chervò Golf Club, he struck his approach shot beautifully, only for it to hit a power line running across the hole, meaning he had to take the shot again.

This is the first time that the Italian Open has been hosted at Chervò Golf Club, which was established in 2008 and is situated next to Lake Garda.

Power lines run across four different holes on the impressive golf course, the 2nd, 4th, 5th and 12th and European Tour Chief Referee Mark Litton said prior to the tournament that he expects more than one player to strike one of the power lines at some point.

“I will be amazed if this doesn’t occur a few times during the week because there are certainly two holes where shots are being hit between the cables,” he said.

Well it didn't take long for Litton's assumption to come true, with Wallace hitting one of the power lines running across the 12th hole.

Wallace had already made a perfect swing and having to retake the shot in these circumstances can often be frustrating, but the Englishman was able to stay calm and put another inch perfect swing on his mulligan, which nearly resulted in a hole-out for eagle. Watch the shot in the video below:

Matt Wallace's shot hit a powerline on the 12th.

If you're not sure why Wallace was able to retake his shot at the 12th hole, check out the ruling that comes into play in this scenario.

Local Rule E-11, which falls under special or required relief procedures, will be adopted here. It states:

If it is known or virtually certain that a player’s ball hit a power line or tower or a wire or pole supporting a power line during the play of specify hole number, the stroke does not count. The player must play a ball without penalty from where the previous stroke was made (see Rule 14.6 for what to do).

Under rule 14.6.a, if a stroke is made from the Teeing area, the original ball or another ball must be played from anywhere inside the teeing area (and may be teed).

Under rule 14.6.b, if the stroke is made from a general area, penalty area or bunker, this original ball or another ball must be dropped in this relief area, no nearer the hole. The shot should be replayed within one club-length of where the previous stroke was made (which if not known must be estimated).

NEXT PAGE: Rory McIlroy SNAPS HIS CLUB in anger during ZOZO Championship first round