European Tour cameraman FALLS OVER during interview at Scottish Championship

A moment to forget for this cameraman during an interview with Marc Warren at the Scottish Championship... 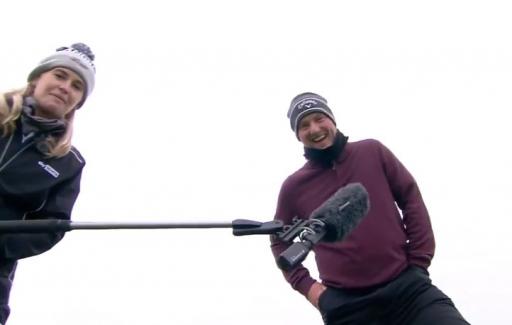 Marc Warren was treated to a spot of on-course entertainment during the opening round of the Scottish Open on Thursday, as the cameraman fell over right in front of him during his interview with Sky Sports.

The Scot has got off to a great start at Fairmont St Andrews for this week's European Tour event and Sky Sports presenter and commentator Iona Stephen stepped in to ask Warren a few questions as made his way to his ball.

The interview was going well but was interupted by some flying feet that suddenly appeared on our screens, as the cameraman lost his footing and fell to the floor.

Watch the hilarious moment in the video below:

A moment to forget for our cameraman at the Scottish Championship this afternoon pic.twitter.com/riHt2HVKCf

Spaniard Adrian Otaegui currently leads the tournament after shooting an incredible 10-under par round of 62, in a faultless round without a single blemish on the scorecard.

A trio of Englishmen are not far behind, with recent European Tour winner Aaron Rai once again sitting pretty in the leaderboard after a 6-under par opening round, a score mathced by Garrick Porteous.

Matt Wallace looks in far better form and currently holds second place. The 30-year-old will be hoping to close the gap on Otaegui before the end of his round.

NEXT PAGE: GolfMagic readers debate whether or not GOLF HOODIES should be allowed on the golf course, following Tyrrell Hatton's epic win at the BMW PGA Championship, where he wore a hoodie every day at Wentworth.