Tyrrell Hatton has won the Alfred Dunhill Links Championship twice already and he is in great shape to make it a hattrick. 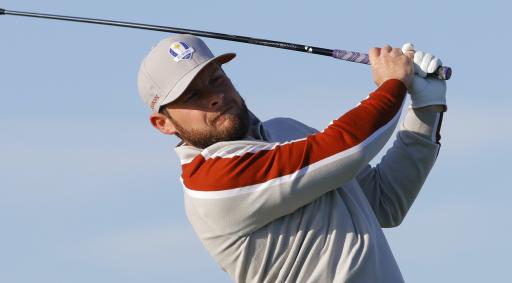 Tyrrell Hatton put the heartache of the Ryder Cup behind him to shoot 8-under-par in the first round of the Alfred Dunhill Links Championship.

Hatton, who began his campaign in Scotland at Carnoustie, shot a fantastic 64 to share the lead after 18 holes with Nicolas Colsaerts, Adri Arnaus and Haotong Li.

The Englishman opened with birdies on the 2nd and 4th holes at the 2018 Open Championship venue, before making two more at the 10th and 11th holes.

Hatton made a brilliant eagle at the par-5 12th hole and he added three more birdies to finish with his score of 8-under-par. The 29-year-old won the Alfred Dunhill Links Championship in 2016 and 2017.

RELATED: WAS SHANE LOWRY OUT OF ORDER FOR HIS RYDER CUP COMMENTS ON DRUNK US FANS?

He was part of the European side who was humbled 19-9 last week up against Team USA at the Ryder Cup, but he has put that behind him to go low in Scotland.

Colsaerts, who played in the Ryder Cup in 2012, made two magnificent eagles at the 5th and 14th holes on the Old Course at St. Andrews on his way to a 64.

Tommy Fleetwood, who won the Pro-Am alongside Ogden Phipps last year, fired a bogey-free round of 6-under-par to sit two shots behind the leaders.

The man from Southport finished tied 12th at The Open when it was last at Carnosuite and he also finished second at the Alfred Dunhill Links Championship in 2014 and 2018.

Fellow Ryder Cup teammate Shane Lowry began his European Tour campaign at Carnoustie as well, but he only managed a round of 1-under-par on Thursday.

The Irishman made three birdies and two bogeys to sit seven shots behind the four-way lead. Defending champion Victor Perez, Jamie Donaldson and Min Woo Lee are also on 1-under-par after round one.

Robert MacIntyre, setting his sights on the 2023 Ryder Cup, made a solid start to the week, as he shot 3-under-par at Carnoustie.

NEXT PAGE: ROBERT MACINTYRE: PADDY CALLED ME BEFORE RYDER CUP - NOW I WANT TO PLAY IN ROME