Brooks vs Bryson Rivalry: Is the feud GOOD OR BAD for golf?

Some people love the Brooks Koepka and Bryson DeChambeau feud, some people are bored by it. But a lot of people have engaged with it... 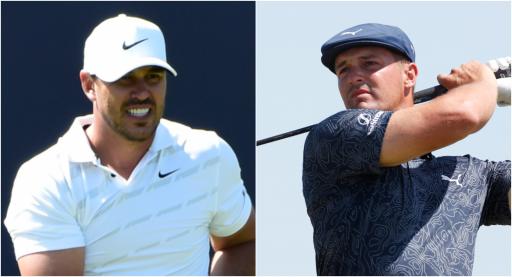 If rivalry didn't exist then sport would be an extremely dull world and there would be far less interest and passion.

You need rivals. You need tension and you need dislike to generate excitement and intrigue and in my opinion, this is exactly what the Brooks and Bryson feud has brought to golf.

How can it be bad for the game? Here are two players with their own personalities and their own approach to the game who are extremely honest and frank when they talk about golf.

As individuals, they do not hesitate to say what they think about their own game, their equipment and the events that they play at. For the media and for fans, you cannot ask for more than transparency and this has added fuel to the fire of their spat.

The social media exchanges, the indirect comments in interviews and the cheeky remarks about one another has entertained thousands of people across the world and has kept them tuned into our sport.

DeChambeau is the most talked-about golfer in the sport, make no mistake. So if he had not come along as the eccentric, fearless character that he is, what would we all be talking about?

I understand that some people may be bored with the spat at this point, as we are all aware of their mutual dislike and there is a fair suspicion that it has been milked for the purposes of the Player Impact Program.

But who is actually bothered by this? Sport is theatre and these two major champions are playing important parts that keep golf in the public interest.

RELATED: BROOKS KOEPKA: "I DROVE THE BALL GREAT, I LOVE MY DRIVER!"

I have been one in the past to criticise footballers for using robotic, media-trained language to churn out the same generic answers that you see after every match.

Would people prefer Brooks and Bryson to take this approach, and eliminate a massive topic of interest and excitement in golf?

In my opinion, I would love to see the feud rumble on and hopefully one day soon, they will be paired together with a PGA Tour title on the line.

NEXT PAGE: HOW MANY DIFFERENT BRANDS DO YOU HAVE IN YOUR 14-CLUB GOLF BAG?