A PGA Tour insider has reportedly claimed Phil Mickelson is not being truthful over his eyebrow raising comments. 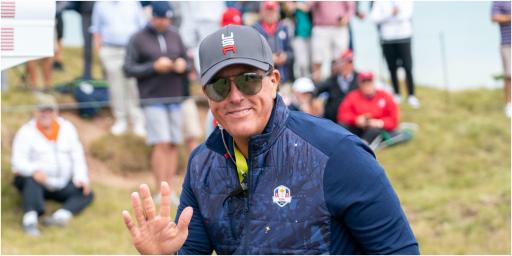 Phil Mickelson is "making stuff up", according to a PGA Tour insider who spoke to Golf.Com on the condition of anonymity.

Mickelson's comments last week sent shockwaves through the golf world. He claims there is more to come.

"I don't know where things are headed, but I know I will be criticized," Mickelson told Golf Digest.

"The media rights are but a small fraction of everything else. And it is the Tour's obnoxious greed that has really opened the door for opportunities elsewhere."

The PGA Tour have not officially responded, though it is likely his comments have caught their attention.

His fellow players have been asked about what he has said. Viktor Hovland didn't want to get involved, neither did Jon Rahm.

More: What Jon Rahm had to say about Mickelson

Although Rahm did go on to say that while he still respects and supports Mickelson as a friend he did not agree with everything he said.

Then he shut down questions about it this week ahead of the WM Phoenix Open. "I said what I said," Koepka told the media.

Now the PGA Tour appear to have responded.

That insider told Golf: "I've never seen anybody be really interested in how we generate the money. There's some conversation about it now because, you know, Phil's making stuff up that's just not true. But in general, they're happy that there's a lot of money that comes from it."

What Phil Mickelson said about the Super Golf League concept:

"I think everybody is looking at it and seeing parts of it that can really help and benefit their situation, their life, their career, and then there's parts of it that they're probably concerned with.

"I'm appreciative of the fact that there is competition, and that leverage has allowed for a much better environment on the PGA Tour, meaning we would not have an incentive programme like the PIP for the top players without this type of competition.

"It was projected to get there in a couple years. To have a season-long payout for the top 10 guys on the FedExCup list came about last year for the first time at 10 million, it's going to double to 20, I think, and that wouldn't be around.

"I'm appreciative of the competition, and what my hopes are is that the biggest thing, which are media rights and the way the players have been used for so long, I hope that that changes through the competitive opportunity, as well."