Tiger Woods: What you might have MISSED from the 'making progress' swing video

It was only a three-second clip but there's a lot of cool things you might not have noticed... 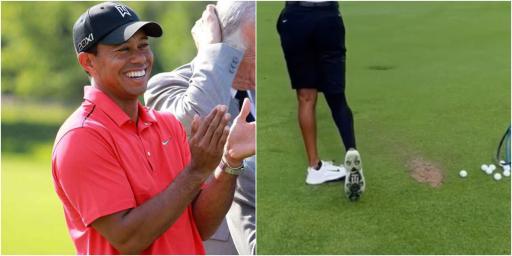 When Tiger Woods posted that three-second video of him clipping away a gentle 7-iron it was hard not to dream again.

After all, he is the reason why millions of us watch and play the game. Without Woods, it's all a little bit flat.

Woods' video which he shared on his social media channels has already been viewed millions of times.

And at the time of writing it has only been up for less than 22 hours and it's got more than nine million views.

When he posted his last comeback swing it didn't reach one million views on his official Instagram page.

The buzz around this is genuinely awesome.

And there are some things Woods' fans will appreciate about the video that they might not have realised at first watch.

Let's face it, the first thing you would have done when you saw that is - perhaps - teared up a little. Then shared it.

First of all, he's ditched that goatee beard.

A clean-shaven Woods winds up his short iron and clips it away perfectly.

Elsewhere, he's wearing a hat that he is particularly fond of:

• Send me a DM if you’re interested in buying an Albany hat like this. Tiger wears the same one. I know someone who can get a few more but they aren’t cheap. Not making any money for this, but I know some of you have asked before On how to get one. pic.twitter.com/77vmm4ScFw

It's from Albany, where he plays in the Bahamas and is soon to be the tournament host at the Hero World Championship.

Hopefully there Woods will speak in public for the first time since his horror crash in February where he had to extricated from his luxury SUV.

The divot pattern is also interesting, too:

This tells us that this could have possibly been a longer practise session for the big cat.

Which also suggests he's been able to swing a club for a while.

He's using a launch monitor, too. Specifically, the one from Full Swing which will set you back $3,999.

Full Swing is proud to be partnered with Tiger on the most innovative launch monitor, that he has tested and trusted, the Full Swing KIT.

What we can learn from this is that Woods is actually caring about his numbers.

Of course, he always has but this is more. He's actually thinking about the future, surely? He's trying to dial it in.

What's more, he's hitting in public. Well, sort of. Woods is using the range at Medalist Golf Club in Florida - near his Jupiter home.

Typically a private man when he's working on his game, this tells us that he's more confident that he can do this.

What else? It's exactly the same caption from before.

The last time Woods made a sensational comeback he teased fans with exactly the same message.

Who wrote this? Tiger, or his media team? Interesting if it was Woods himself. It would suggest a level of confidence he had before.

What else? He looks strong. His arms, in particular, suggest he's still been a regular in the gym.

It is possible we are looking in too much detail about this, but it is hard not to get excited.

Woods is back, baby.

In the words of Stringer Bell from The Wire: "I want you to put the word out there, that we back up."