"We are thrilled to announce a monumental addition to the Srixon family." 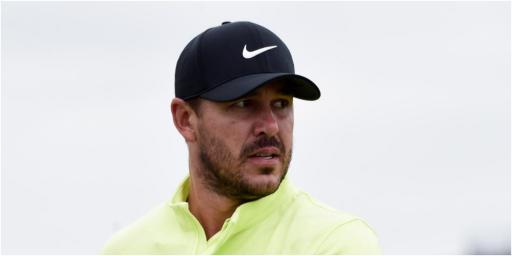 It's official. Brooks Koepka has joined the Cleveland/Srixon family.

Koepka has been a long-time admirer of the brand and this was rumoured to be happening at the beginning of the year.

But today they announced the news on their social media channels.

They had previously teased the signing and it was obviously Koepka who was the mysterious figure hitting bombs.

"We are thrilled to announce a monumental addition to the Srixon family," they wrote.

We are thrilled to announce a monumental addition to the Srixon family. Someone who brings a modern style, one-of-a-kind swag, and a competitive edge like no one else on Tour. Welcome to the team, Brooks Koepka! #TeamSrixon pic.twitter.com/IFZNaeWCIh

"Someone who brings a modern style, one-of-a-kind swag, and a competitive edge like no one else on Tour.

"Welcome to the team, Brooks Koepka."

A video of Koepka, 31, smashing balls accompanies the post.

"I like what I'm seeing on this one," he said. "Boys I don't think it gets much better than that."

This now means the biggest equipment free agent is off the market.

Koepka, a four-time major champion, has played for the last five years without an equipment contract.

It has been reported that this is a multi-year deal which will see him play with the company's clubs and ball.

These changes are expected to be seen at The Match this week in Las Vegas which sees him play against Bryson DeChambeau.

Brooks Koepka is going to hear this after every swing for the rest of his life pic.twitter.com/jSDOBeIpJS

GolfDigest quoted Koepka as saying: "I am very excited to join my good friends Shane Lowry, Graeme McDowell and Hideki Matsuyama as a Srixon and Cleveland Golf Tour staff member.

"I’ve been an equipment free agent for the past few years, so it will be fun to be involved with a company on a daily basis and be able to contribute to the development of their future equipment.

I put the ZX7 Irons in play in January and it is the best iron I have played on tour. I look forward to kicking off our new partnership this week in Las Vegas."

Koepka will now use a Srixon ZX5 driver set at 9.5 degrees with a 44.5 inch Mitsubishi Diamana D+ 70 TX shaft.

Oh, and he'll have a shiny new Srixon staff bag.

That left Koepka without a deal. He has managed okay, to say to the least, without a brand as he has won seven times, got to the top of the official world rankings in 2018.

It'll be interesting to see how his career fares from here.