Maeve Danaher teamed up with Belfast's Michael Hoey to win the team event shooting a 60 on the final day at the Old Course. 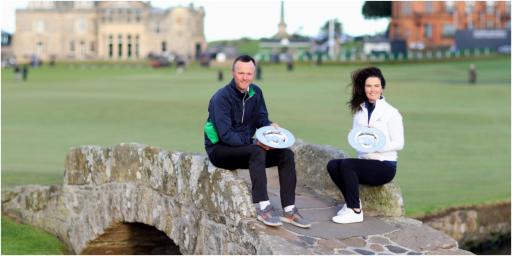 History was made at the home of golf over the weekend when Maeve Danaher became the first woman to win the team event at the Alfred Dunhill Links Championship at St Andrews.

Danaher, who plays off 22, teamed up with Belfast's Michael Hoey to claim victory as they carded rounds of 62 at Kingsbarns, 67 at St Andrews and 63 at Carnoustie before closing with a stunning 12-under par 60 on the Old Course.

Interestingly Danahar, who plays her golf at Adare Manor in Ireland, plays lefty but putts right-handed. The icing on the cake was that she managed to beat her husband Gerry McManus, who played with Shane Lowry.

"Gerry and I had a little bet on the first day to see who could get the best score, so I’ve won that. And that’s really pleasing," she told the Independent.

He made a crucial birdie at 18 from four feet to sign off for a 69. As a team they made eight birdies and three eagles on their way to a 60.

"She was great company. She came in, dovetailed well. Got lucky, really, came into the right holes, both of us," he also told the paper.

Danny Willett claimed his first victory on the European Tour in two years in taking the individual title.

In partnership with Michael Hoey, Maeve Danaher became the first woman to win the team prize at the Alfred Dunhill Links and she's the lefty! pic.twitter.com/ZQZljbckbS

RELATED: THE NEXT PGA TOUR CHAMPIONS EVENT HAS A STACKED FIELD