Is this the ANGRIEST golfer you've seen since Tyrell Hatton's parody?

This player might need to hit a provisional tee shot. 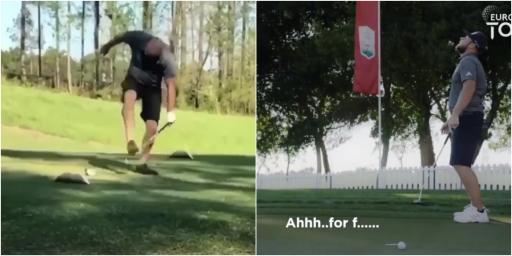 Golf is a frustrating sport and we've all had our fair share of tantrums whether we like to admit it or not.

From a hosel rocket, a slice to a massive skull with one of your wedges off a tight lie - it's impossible to not vent our frustration sometimes.

One video appears to have gone viral of a man snapping his driver off what we can only assume is an errand tee shot.

Posted on @golf_gods Instagram page, the tall man smashes a drive then keeps shouting the word "no".

Without a single bit of hesitation, he takes the big stick and snaps it firmly in two before crumpling it up and walking away.

That'll be a provisional, then.

Social media users were asked to tag their mates who are known as the angry ones in their groups.

In all honestly, golf can be an ugly game when people get angry - it's not nice to see.

The European Tour have previously mocked angry golfers on tour with some of their stars taking part in a mockumentary.

Last year Tommy Fleetwood starred as the head of a self-group group for angry players.

In the end, it's Fleetwood who loses his temper after constantly telling the other group members to switch off their phones.

NEXT PAGE: LAWYER INCORRECT TO USE TIGER WOODS ANALOGY