Are you allowed to still use a golf club that you have BROKEN IN ANGER?

Have you ever snapped your putter and wondered if you are still allowed to use it on the greens? 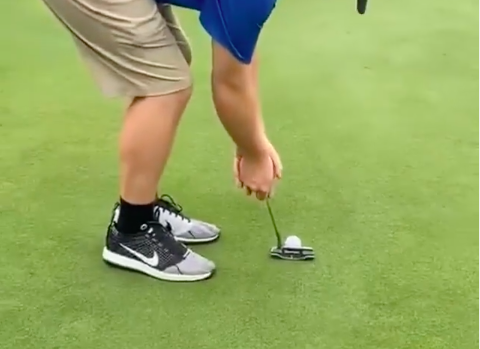 Picture the scene: you have just made back-to-back double-bogeys and you are at the brink of tipping over the edge. You come to the next green and you miss a three-footer for par, and it all becomes too much.

You take your putter and as hard as you can, you pull it down and snap it over your knee, much to the hilarity of your playing partners and other golfers on the course.

You now don't have a putter you can putt with, and you may as well not bother using an iron or a wood because that will prove to be too difficult.

So, according to the Rules of Golf, are you allowed to use the end of the putter that you have just snapped to putt for the rest of your round?

RELATED: PAIGE SPIRANAC BELIEVES MAX HOMA NOW HAS WHAT IT TAKES TO WIN A MAJOR!

The answer is most certainly, yes. You may have to bend down and hurt your back and it may be an extremely uncomfortable style of playing golf, but you are allowed to play with a club that you have snapped in rage.

According to golfrules_questions, Rule 4.1 states that you are allowed to play with a damaged club and you can try and repair it, but you are not allowed to replace it with another club.

RELATED: HOW MUCH MAX HOMA AND OTHERS WON AT THE PGA TOUR'S FORTINET CHAMPIONSHIP

You feel a little silly and immature when you snap a club. It is not a nice feeling, but at least you have released your anger and you now know that you can still use the club if it is still in a playable state.

But remember, it is important to try and behave in a calm manner on the golf course and behave as well as possible, even if your frustration makes your playing partners chuckle.

rules of golf
club break
putter
local golf
rule 4.1
<
Previous
Paige Spiranac believes Max Homa now has what it takes to win a MAJOR!
>
Next
Tiger Woods to give MOTIVATIONAL SPEECH for Team USA at the Ryder Cup
Latest News
Golf news
Bryson DeChambeau muscles his way into final 64 of PLDR after facing LIV critics
Golf news
Did you know about this "LEAF RULE" ahead of your autumn and winter golf?!
Equipment news
Best Golf Putters 2022: Buyer's Guide and things you need to know
Golf news
Bryson DeChambeau arrives for Pro Long Drive World Championship in Nevada
Equipment news
Guido Migliozzi: What's in the bag of the Cazoo Open de France winner?
Latest Reviews
Irons
Caley Golf Iron Set Review | Is this the best value iron of 2022?
Putters
Zebra Putter Review | "One of the most popular golf products ever!"
Wedges
A Spin MACHINE! Callaway JAWS Raw Golf Wedge Review
Wedges
Their BEST Yet?! TaylorMade Hi-Toe 3 Golf Wedge Review
Footwear
Duca Del Cosma Churchill Golf Shoes | Best Golf Shoe Review
Equipment Reviews
Equipment
FootJoy's Blues Collection is perfect for your game this summer!
Equipment
Peter Millar have an AMAZING selection of golf shorts!
Equipment
The BEST PUMA golf polo shirts as seen on the PGA Tour!
Equipment
The BEST Nike Golf shirts as seen at the PGA Championship
Equipment
NEW VICE Pro Drip Silver Hills Golf Balls: Limited Edition
Latest Tips and Instruction
Tips and Instruction
DP World Tour pro Hurly Long and his meditation technique...
Tips and Instruction
Learn how to chip like a winner on the DP World Tour!
Best tips and instruction
What can we learn from Jordan Spieth's new pre-shot routine on the PGA Tour?
Tips and Instruction
How to NEVER MISS another short putt with Manolo Vega!
Tips and Instruction
Sergio Garcia tells Me and My Golf GREAT driver tip: "Pull the chain!"
Related Articles
Golf news
Golf rules: Are you allowed to line yourself up with your golf club?
Golf news
Rules of Golf: How many shots does this player take with bizarre chip technique?
Golf news
Rules of golf: Did you know this rule about clubs being damaged in your bag?
Golf news
Did you know this rule about teeing up your ball ahead of the tee markers?
Golf news
Do you have to place your marker behind the golf ball on the green?