Are you penalised for hitting a moving ball in this STRANGE situation?

If your ball is stuck in a branch but waving in the wind, are you allowed to hit it out? 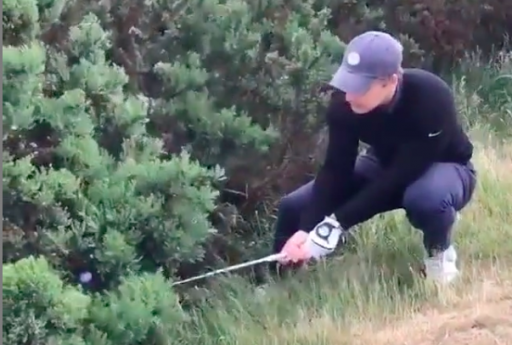 Golf is a sport of an infinite amount of variables and in each round that you play, you can find a completely different situation on each hole.

This is why we love the game and why we keep coming back, despite the frustration and annoyance that it can cause on a regular basis.

One source of frustration can be the rules, which is a complex network that covers every little respect of the sport. It is worth knowing as many golf rules as possible in order to play your round as smoothly as possible.

It is impossible to know every rule, especially rules as extraordinary as the one we are about to explain off the back of a video that was posted on social media by golfrules_questions.

As you can see in the video, the player's ball is stuck in a branch in a bush. While it is stuck in the branch, the wind is making it move from side to side.

The questions here are: Is the player allowed to hit the ball even though it is moving in the branch? Is the ball classed as being in motion?

RELATED: BRYSON DECHAMBEAU ON HOW GEOMETRY OF GOLF BALL DIMPLES TRANSFORMED HIS PUTTING!

Unless the player was deliberately standing on the branch to bring it to an optimum hitting height, there is no penalty for the player in this situation.

As it turns out, he hit a very good shout out of the bush. His ball comes out cleanly and rolls on to the green.

NEXT PAGE: "YOU MAKE NOTHING": BRYSON DECHAMBEAU ON FINANCIAL PERILS OF THE PGA TOUR