Brooks Koepka: Some of us will lose golf balls without fans!

Koepka predicts higher scores on the PGA Tour should events go ahead without fans due to coronavirus... 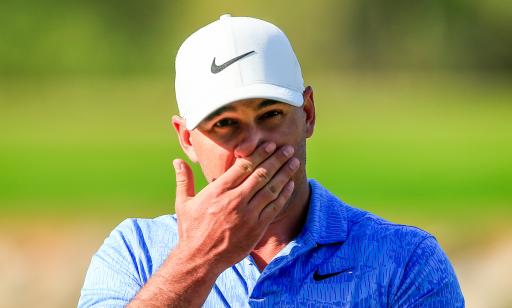 Brooks Koepka has revealed the harsh reality that PGA Tour players will end up losing golf balls should tournaments go ahead in the summer without fans.

The PGA Tour confirmed last week that plans are in place to resume their tournament schedule at the Charles Schwab Challenge at Colonial from June 11 to 14, but fans will not be permitted for at least the first four events.

"It’s going to be awful without fans," Koepka said during a podcast appearance on 'Pardon My Take' last week - watch the full interview in the video above.

"The energy that the fans bring, that’s what we all live for, we all strive for; it’s going to be so weird.

"You want to play coming down the stretch and have everyone cheering for you. Imagine this: you sink the putt on the last hole and no one’s clapping. You’re just there by yourself, and you’re like ‘yes!’ Just you, your caddie and just silence."

RELATED: RYDER CUP COULD GO AHEAD WITHOUT FANS!

Koepka is also expecting some bigger numbers going down on scorecards with a lack of fans outside the ropes.

"Every once in a while, we just hit some foul balls and the fans kind of help you find it," said the four-time major winner.

"I mean guys are going to lose balls because of that."

Koepka lost his World No.1 status to Rory McIlroy in February, and then slipped to third behind Jon Rahm when missing the cut at the Honda Classic in early March.

NEXT PAGE: HERE'S WHAT TIGER WOODS' PGA TOUR SCHEDULE WILL LOOK LIKE AFTER THE CORONAVIRUS LOCKDOWN...