Scottish superstar Carly Booth starred in a hilarious Paddy Power advert where she puts a sexist armchair golfer in his place. 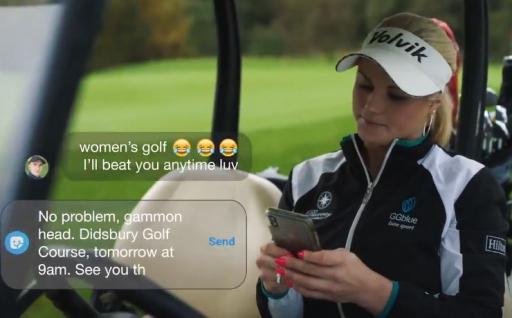 Carly Booth starred in a brilliant new advert with bookmaker Paddy Power where she takes on a sexist armchair golfer in a round of golf, after he sent her a message on Instagram, mocking the women's game.

The man in the video, labelled a "gammon head" by Booth, sits down with his friends at the pub and boasts about how he could beat the Scottish superstar "with his eyes closed".

He sends Booth an arrogant message challenging her to a match, to which the 28-year-old responds, before the pair went head-to-head at Didsbury Golf Club.

The three-time Ladies European Tour winner puts the misogynistic chap in his place, before giving him a taste of his own medicine with a phrase that far too many female golfers have received on the golf course: "Stick to the kitchen sweetheart."

The video went down brilliantly on social media and received hundreds of replies through multiple accounts.

"Absolutely brilliant! I’m sure most of the female pros I know have had more comments like this than they can count so what a great way to address it! Well done Carly Booth and Paddy Power," said presenter and ambassador for women's golf, The Jazzy Golfer.

NEXT PAGE: Why Tiger Woods' par-3 NIGHTMARE could indicate VICTORY at 2021 Masters