Chris Wood: I would have loved more games at Ryder Cup

Englishman reflects on Ryder Cup debut and making history at The Grove.

Making his first start since teeing up at Hazeltine two weeks ago, Chris Wood struggled to hide his disappointment at being played just twice during his European Ryder Cup debut.

Wood, 28, was one of six rookies in Darren Clarke's European Ryder Cup side but performed impressively when securing a 1 up victory alongside Justin Rose in the Saturday foursomes, before going on to lose narrowly to Dustin Johnson in the Sunday singles.

Speaking to GolfMagic.com ahead of this week's British Masters at The Grove, the giant Bristolian was full of praise for Clarke but felt he had done enough on Saturday morning to justify another shot alongside Rose in the afternoon fourballs.

"Darren was very motivational from the start of the week," said Wood. "I've known him since I turned pro and he's been good with me.

"Naturally as a losing captain, he's going to get fingers pointed at him, but I have nothing but admiration for him and he was fantastic with all of us.

"On a selfish level, I would have loved to have been out there in the afternoon with Justin Rose. We felt like we had the momentum.

"Darren obviously felt that he could sort of help me and Fitz [Matthew Fitzpatrick] early in the morning by splitting Justin and Henrik [Stenson] up, and that was our sort of taste of it, and that we would be fresh for Sunday. We were extremely fresh.

"I can imagine it's hard playing all five games in the Ryder Cup. Easy in hindsight but I imagine it's definitely a sort of balancing act, really.

"No matter how many you've been to, the Monday or Tuesday after, it's easy, isn't it.

"The Monday or Tuesday before, it's hard. That's the pressure of being a Ryder Cup captain."

Wood, one of six European rookies at the Ryder Cup, was handed just two games by Clarke (Photo: Getty Images)

For many European fans, it was a surprise to see Wood omitted from the Saturday fourballs having played superbly alongside his compatriot Rose in their Saturday morning foursomes victory against Jimmy Walker and Zach Johnson

Especially when hearing what Rose had to say just moments after the match.

"Captain said to me, 'How is he doing,' walking to the 16th, I said 'incredible'. His touch on the greens is amazing. I have so much faith out there, such a cool feeling, and I'll play with him any time, any place."

Clarke had already set his Saturday fourball pairings in stone, though, and Rose was to once again play with Stenson just as he had done for both matches on Friday, and also at Gleneagles in 2014.

Rose and Stenson would go on to lose their Saturday fourballs match 2&1 to Jordan Spieth and Patrick Reed.

Underneath the frustration at being sidelined, however, Wood cherished every moment of landing his first ever point at a Ryder Cup.

In fact it felt just as sweet as winning the BMW PGA at Wentworth earlier in May.

"Once you're out on the course, with the caddies, the feeling of winning a point in the Ryder Cup is as good as winning a tournament.

"What myself, Rose and the two guys on the bag have put into those 18 holes, you're playing for everyone in the team and back at home.

"It just seems very, very tough to win a point in the Ryder Cup. The games are so strong, every single pairing is strong. We played Zach Johnson, Jimmy Walker and obviously with Justin, I'm the odd one out; I'm the only one without a major.

"It would be easy to let it slip away a little bit and not step up to it but I felt like I really did that well."

Rose could have presented him with an easier opener though.

"Rosey pulled it off the first tee, so I had a nice first shot under a tree!

"Thankfully I managed to play a decent shot onto the back of the green and that sort of settled me down.

"Justin was a great partner to have, and I thought we gelled really well together." 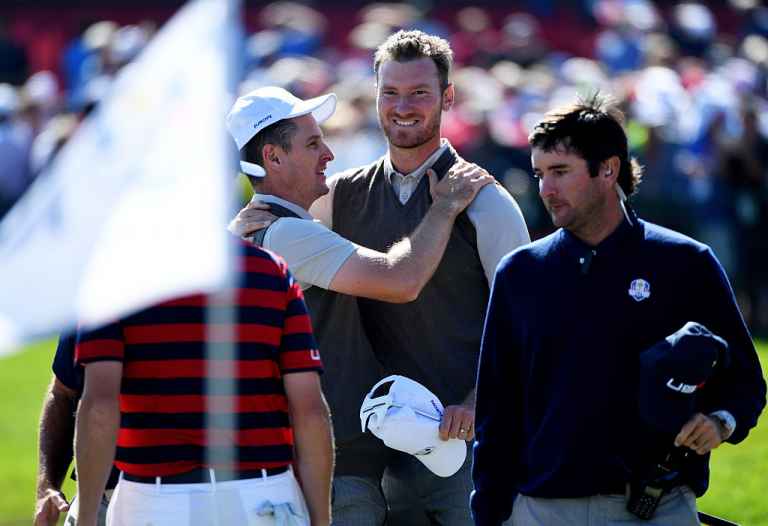 In terms of his narrow Sunday singles defeat to Johnson (1 down), where he already learned the fate of the Ryder Cup before reaching the 18th tee, Wood believes he could not have played much better.

"I played well against Dustin, I think I was 5 or 6-under and narrowly came up short on the last.

"Obviously it was always going to be tough to beat the world number two. Dustin has probably performed the best this year of any player in the last six months.

"I will also say he had me by about 40 yards on every tee, and I'm not the shortest hitter in the world!"

Wood lost 1 down to Dustin Johnson in the Sunday singles (Photo: Getty Images)

It may have only been two games, contrasted with mixed emotions, but it was all invaluable experience for Wood to take forwards.

"I'm now not a rookie anymore, which is a great thing.

"I can go into my next one, which I hope is Paris in 2018, and then knowing what to expect, but also with that experience behind me.

"I don't want to just play one Ryder Cup. I want to play five or six, and then particularly, having played one and we've lost, you don't want that feeling again.

"I want to experience the Sunday night in the team room when we've got the Ryder Cup and you can take it home with you, all that sort of thing."

Wood is eager for another crack at a Ryder Cup in 2018 (Photo: Getty Images)

As for the minority of American fans who spoke out of turn during the matches, Wood revealed he dodged a couple of bullets.

"It didn't get to me at all, but then I wasn't really one of the main targets.

"Rory [McIlroy] and Sergio [Garcia] took the brunt of it. Some of the things that were said to them were out of order.

KAYMER: THERE WERE SOME IDIOTS AT RYDER CUP

"Some of the things that were said to me were harmless to be honest.

"Maybe three or four Ryder Cups down the road, it might start p****** me off, but when it's your first one, it's just an unbelievable atmosphere to play golf in."

Wood has a chance to join an elite group of names with victory at the British Masters this week (Photo: Getty Images)

As for this week's British Masters, Wood can join an illustrious group of players to win both the BMW PGA and the British Masters in the same season.

Sir Nick Faldo (1989), Seve Ballesteros (1991) and Colin Montgomerie (1998) all managed the feat, and Wood would love nothing more than to add his name to the list.

"That's quite a big thing for me to take in, and that's extra motivation to try and compete and try and win the tournament this week.

"That would be quite something to have on your CV really, to be associated with those three players."