Did you know this rule about caddies standing on their player's putting line?

Are caddies allowed to deliberately stand on their player's putting line to provide a physical guide to the hole? 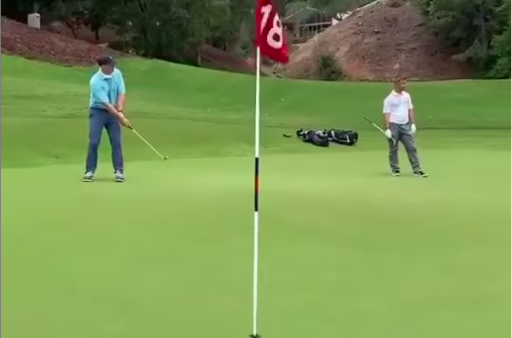 Caddies play a vitally important role on the PGA Tour. They help players make rational decisions and keep them cool and collected when they are under pressure and in difficult situations.

From Bones Mackay to Steve Williams, some caddies have turned into legendary figures in golf by forming lasting partnerships with players, who are also their friends.

But as caddies, they must know the limits as to which they are allowed to help their player and this is outlined in the rules of golf that govern the game.

A video recently surfaced on social media of a caddie standing on the intended line of his player's putt. The golfer putted his ball across his intended line towards his caddie and incredibly, the ball dropped in the cup.

However, this is against the rules and if this happened on the PGA Tour, it would immediately be flagged up and the player would receive a general penalty.

If your caddie stays stood on your intended line for a putt when you hit your ball, this is a violation of Rule 10.2b (1). They may stand on the intended line to help their player but must move away before he takes his stroke.

It is important to know as many rules as possible when you play golf, especially if you have a caddie. The full rule regarding caddie's help is stated below.

10.2b (1) Pointing Out Line of Play for Ball Anywhere Except on Putting Green.

A player may have his or her line of play pointed out by: