Bukayo Saka had a day to remember this week when starting for England at the European Championships. 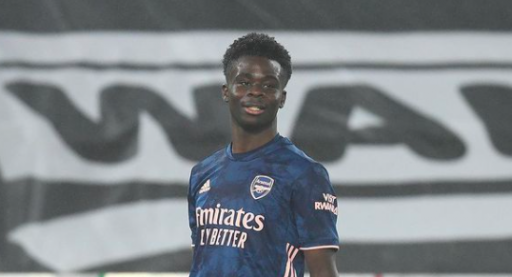 Bukayo Saka made his first start at a major tournament for England on Tuesday night, starring in a 1-0 win over the Czech Republic at Wembley.

This victory secured top spot for the Lions in Group D, which means that they have a date with destiny with Germany in the last 16 on Tuesday, June 29th.

While England have been training hard under the watchful eye of manager Gareth Southgate, they have a lot of spare time to kill and spend at their leisure.

So Saka joined his international teammate and Manchester United defender Harry Maguire for a spot of golf. They did not go to a course, but they tried their arm at a golf simulator at what appears to be their training complex.

Maguire, who also made his first appearance at the European Championships for his country on Tuesday, filmed the young Arsenal winger taking his swing.

But it is fair to say that the 19-year-old should keep pursuing football, as it would appear that he hasn't spent much time on the golf course or the driving range.

Despite having somewhat of a babyface, Saka can be a cold-blooded killer in front of goal and he has emerged as arguably Arsenal's most important player in the squad.

However, the young Londoner does not show the same conviction when he has a 9-iron in his hand. He takes a very short swing at the ball and performs an air shot in the video on Maguire's Instagram story, before finally making contact.

It wouldn't be a shock if Saka one day become a competent golfer, as he can clearly pick things up quickly at a young age, but he may need to spend more hours on the driving range.

NEXT PAGE: PAIGE SPIRANAC ON BRYSON DECHAMBEAU: "HE IS FUN TO HATE ON, HE IS AN EASY JOKE"