Five of the most CONTROVERSIAL golf moments of 2021: From DeChambeau to Rahm

We take a trip down memory lane to look at five of the most tempestuous moments of 2021... 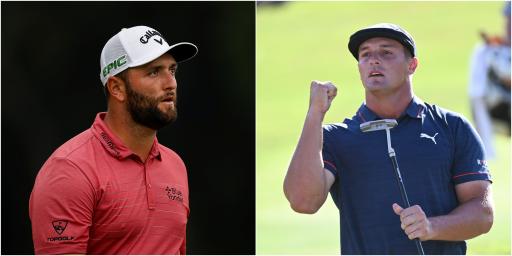 Christmas is upon us and the calender year is drawing to a close.

Golf has had an interesting year due to the pandemic and the impact it has had on tournaments and our lives.

As ever, 2021 has thrown up moments of misunderstanding and controversy.

Here at GolfMagic, we decided to take a look at five moments that will go down in history.

From Bryson DeChambeau's fore shouts, or lack thereof, to Patrick Reed going doing digging, we've had it all.

Nelly Korda's putt is picked up too quickly by the Europeans, so Nelly is considered to have holed out the previous stroke. Take a listen. pic.twitter.com/1jPwzfXP2z

Whether it is the Ryder Cup or the Solheim Cup it always delivers key moments.

Yet again we were treated to something that will no doubt divide golf fans' opinions.

What happened? Well, Nelly Korda had an eagle putt at the 13th hole in her match against Madelene Sagström and Nanna Koerstz Madsen.

Her putt was left agonizingly close to dropping in and Sagström stepped forward and tossed the ball back to Korda, conceding the birdie putt.

But under Rule 13.3b Sagström didn't wait long enough - 10 seconds - to see if the ball would drop.

Whether you think it was going to drop is entirely a matter of opinion.

But the infraction meant that Korda and partner Ally Ewing went 1UP and never surrendered the lead.

It left a sour taste in the mouth.

Patrick Reed gets a free drop

How can we ever do a round up of controversial moments and not include Patrick Reed.

Love him or hate him, he delivers drama.

Reed got himself into a spot of bother again at the Farmers Insurance Open in January when he was awarded a free drop from a plugged lie.

But not before he had a root around to assess the situation.

Reed said to the rules official, "It seemed like it (the ball) broke ground, but I want you to double check. They said it didn't bounce."

Reed poked his finger into an indentation in the deep grass, as did the rules official.

He was allowed to take a drop without penalty and scrambled to make par, sinking a 14-foot putt.

It's been another interesting year for Bryson DeChambeau.

When he turned up to the Arnold Palmer Invitational, his driving power split opinion.

He screamed after one of his drives when he took on the lake. Some didn't like the direction he was taking the game.

Then at the Ryder Cup he bombed one 417 yards to the green and duly sank his eagle putt in his Sunday Singles match against Sergio Garcia.

But what really upset golf fans was that DeChambeau wasn't shouting fore enough.

He failed to yell when he hit an errant tee shot on day one of the WGC-FedEx St Jude Invitational at TPC Southwind.

DeChambeau was grilled about this when he appeared at The Open, and snapped, saying he does shout fore "99 per cent of the time".

That percentage is up for debate.

Patrick Cantlay gets the nod

Patrick Cantlay has been sublime in 2021.

It earned him the PGA Tour player of the year title.

But that, in itself, was controversial.

Many felt Jon Rahm, the world number one, deserved the title.

Rahm recorded 15 top-10 finishes and claimed the U.S. Open in June at Torrey Pines and had the better statistical year and record in the majors.

He led Cantlay by six strokes at Memorial when he was forced to withdraw after testing positive for COVID-19.

Cantlay went onto win, then claimed the FedEx Cup.

"I felt like I played good enough to be able to earn that title, but unfortunate situations like the one at Memorial cost me, right? Had I been able to play, maybe win it, I think it would have tipped the balance towards myself. Maybe even play in the Olympics, have a good showing and maybe even earn a medal could have tipped the balance as well."

Abraham Ancer gets penalized at The Masters

I was just informed that I have been assessed a 2 stroke penalty for unintentionally grazing the sand in my backswing on hole 15. While I’m gutted, I can’t wait to get after it tomorrow. pic.twitter.com/5ZOlthQzeE

Ancer was given a two-stroke penalty after he completed his opening round at Augusta National when it was ruled he unintentionally grazed the sand when addressing his bunker shot on his backswing at the 15th hole.

Ancer posted the video, which has got millions of views. He said he was gutted and couldn't wait to get at it again on day two.

But fans were left trying to see at which point the wedge actually touched the sand...

bryson dechambeau
patrick reed
brooks koepka
Tiger Woods
solheim cup
Previous
Qualification for The Masters 2022: Ian Poulter has work to do to reach Augusta
Next
How to watch the QBE Shootout: A UK and US TV Guide for the PGA Tour