The 28-year-old had an interesting first hole in the third round of the Hero World Challenge... 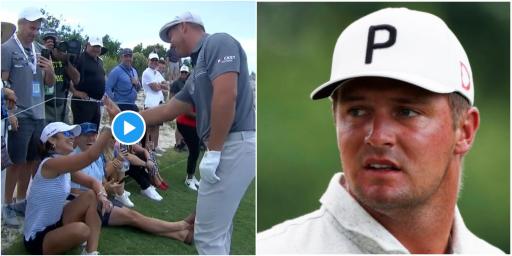 Bryson DeChambeau's first hole in the third round of Tiger Woods' Hero World Challenge was interesting to say the least.

DeChambeau, 28, was seen joking around with Woods earlier in the week, hitting bombs and throwing around a football with the big cat.

But the Ryder Cupper was all game face on Saturday as he sought to make a move in Albany, Bahamas to try and chase down the leaders.

DeChambeau's drive found the fairway. Straight down the middle. Then he took a wedge and tugged it a little bit left.

It FLEW over the pin and landed next to a spectator and the ball ripped back then trickled next to the hole for a birdie putt.

DeChambeau took the time to high five and apologize to the spectator and gave her a Bridgeston golf ball.

What happened next was uncharacteristic of DeChambeau. He smashed his putt through the break.

Then he missed the returning tiddler for par. An interesting bogey to say the least.

There are no pictures on the scorecard, eh?

DeChambeau went on to card a 1-over par 73 which will have frustated him as he shot 64 (eight-under) the day before.

This week DeChambeau discussed how he almost quit golf as attacks on his character on social media affected him.

But his inner circle rallied round him, he said, and he got himself back into a better place.

You can read abut that here.