Gary Player is in awe of Bryson DeChambeau right now, but believes golf equipment must be changed to save the professional game. 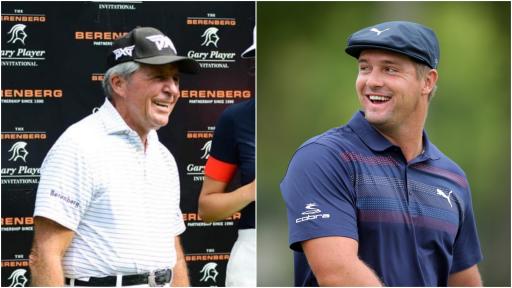 Gary Player has nothing but praise for what Bryson DeChambeau has accomplished over the past few months, but believes golf's governing bodies must alter the equipment used in the professional game and thinks limiting golf ball distance is the key.

DeChambeau proved many doubters wrong by adding size and speed to his game to great affect, helping him win the US Open at Winged Foot in September.

Player believes that DeChambeau has one of the best swing "a human being could have" and that he will win the Masters in November if he has a "reasonable week".

"He is a step above them all, and he has a phenomenally good golf swing. They all say he has a strange swing. It might look strange, but basically in pieces it's one of the best swings a human being could have.

"This man, there's no telling how well he can do."

Despite his admiration for DeChambeau's game right now, Player feels strongly about the need to change how far players can hit the ball in the professional game, something that the USGA and R&A have said they plan on investigating in the near future.

"But what perturbs me is the golf manufacturers, particularly the golf balls, they're reluctant to change. But all golf balls go the same distance now," added Player.

"No one golf ball goes further than the other. I've tried them all. They're not allowed to go further. So, if we cut the balls back further, 50 yards, it's not going to affect their sales.

"So, we must cut the ball back, and it will happen. As sure as I'm standing here, it will happen, otherwise they're going to make a mockery of these golf courses, and we cannot make them longer because we're running out of water."

Player went on to say that even the most famous golf courses on the planet can't stop the big hitters from making a "mockery" of holes, including Augusta, where Player won the Masters three times throughout his career.

"You cannot defend yourself anymore. There's no defence," he said.

"Look at the rough at the US Open. The average golfer there would take a sand wedge to get out. DeChambeau takes a four iron out of there. There's no defence anymore.

"The only defence we have is to cut the ball back at least 50 yards, in professional golf only, not amateur golf, otherwise they're going to make a mockery of holes. They will drive the first hole at Augusta. To me that's quite sad."

NEXT PAGE: Bryson DeChambeau hits back at Matt Fitzpatrick comments